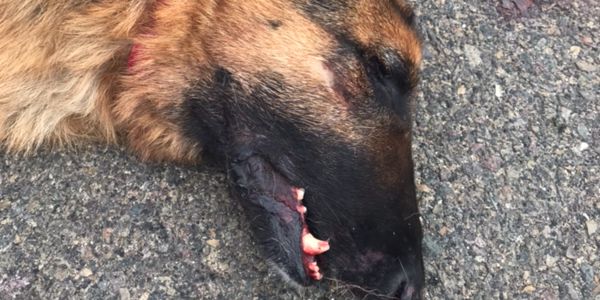 BOYCOTT MOTEL 6: DO NOT STAY HERE IF YOU HAVE A PET.

MANY dogs have gone missing & been killed because of recklessness of Motel 6. My mission is to ensure no pet parent ever have to endure the horror of collecting their precious pet  crushed on the highway because of Motel 6.

I stayed one night. When I returned to my room, my German Shepherd service dog. Valkyrie, was missing. I was told a security guard saw my room flung wide open, so he closed it and did nothing. I was hysterical and went to the front desk. I learned Valkyrie had been seen in the parking lot, but no one called me, or the police. The front desk clerk, EMILY DORN, was abusive. I went out searching for Valkyrie and upon my return was evicted. I spent the rest of the wee hours searching for my Val. Animal control called to let me know she had been killed on the highway.

I went to the highway and collected her crushed body. When I went back to the hotel to talk to the manager, BRANDON GAUDETTE, he told me he was calling the police on me. The risk management person in Texas - CLAUDETTE BRYANT - claimed Valkyrie opened the door, which she did not do.

Check the host of bad reviews across the internet. They regularly give keys to occupied rooms to new guests, are infested with bedbugs, are used as homeless shelters, and hired incompetent staff.

Just ONE month before another guest returned from dinner to find his door wide open and his dog missing. Just one month...

Here is the San Diego Channel 10 story on my dog.
https://www.10news.com/news/woman-claims-motel-let-dog-escape-onto-freeway-where-it-was-killed

In Sylmar, California a woman came back from the doctor and her dog was missing. They claimed her dog had chewed the screen off the window and got out. But her eight-year-old dog had no upper or lower teeth. Here's her story on the news:https://ktla.com/2017/10/16/owners-search-for-missing-dog-last-seen-at-motel-in-sylmar/A Pomeranian was stolen out of a Motel 6 in Las Vegas.

A service dog was killed when the owner escaped the hurricane to the perceived safety of Motel 6 in Dublin, Georgia. Her dog was killed.

Most recently, a cocker spaniel was stolen after a break in at an Albuquerque Motel 6. Motel 6 did NOTHING to assist the owner. I, and many friends who cared, enlisted social media groups to post the dog's photo. Within 24 hours he was found. Again, Motel 6 did nothing to assist.

Another dog was let out of a #Motel6 in Chula Vista and was killed.

Yet another, in Los Angeles, was let out by the maid and hit by a semi. Her daughter, who saw the incident, suffered a seizure.

After reading my Petition, a woman in Mojave, Arizona recounted an incident where she helped a dog owner search for a dog which was let out of a room by a maid.

Motel 6 has been designated the worst hotel chain in the US for 2018. https://www.rd.com/culture/worst-hotel-chains/

And, if you can, please donate to the Justice for Valkyrie campaign on Go Fund Me. https://www.gofundme.com/JusticeForValkyrie I want to ensure that no pet parent ever endure the horror of collecting their precious crushed pet on the side of the highway because of Motel 6.

Motel 6, a $3 billion corporation has hired a team of lawyers to further crush me.

And for updates on crime at Motel 6, please join this Facebook page:https://www.motel6crimereports.com/blog/motel6petfriendly