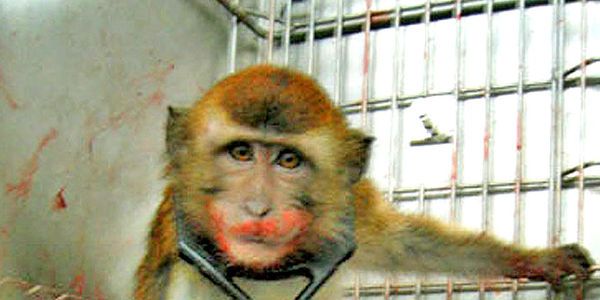 I was horrified when I found out that the University of Washington, where I went to college, performs sickening experiments on monkeys. Employees at the school perform grisly vivisections -- experiments on live animals -- drilling holes into the skulls of monkeys, implanting coils on their eyes, and tearing infant monkeys away from their mothers to intentionally cause psychological trauma.

Please sign this petition to demand that the National Institute of Health stop sending taxpayer dollars to the University of Washington to fund these cruel and unnecessary experiments.

The primate research taking place at University of Washington is scientifically meaningless. Experiments on baby monkeys are fraudulent and cannot be extrapolated to humans, but University of Washington vivisectors routinely perpetrate barbaric experiments on baby monkeys such as inducing convulsions, disfiguring eyes, suffocating them, torturing babies while still in their mothers' wombs, causing deformities and more.

If the babies don't die on their own, they are killed at one year of age and thrown away. For this the vivisectors received over $18 million of our tax dollars between 2010-2011 alone and another $12 million to breed baby monkeys for other laboratories to torture.

Other schools, including Harvard University, have been forced to shut down their live animal experiments -- if enough of us speak up, we can get the University of Washington to do the same. Please sign this petition and share it to shut down this horrible lab.

For pictures and more information, go to www.peopleforreason.org

The revulsion we feel reading about the horrendous cruelty which is being perpetrated by vivisectors at the University of Washington is overwhelming. In this case we are focused on the baby monkey lab where the pictures of babies being tortured are so heartbreaking there are not words to describe our emotional devastation.

Thomas Burbacher poisons preganant primates with toxins and SIV knowing it is irrelevant to humans. For this he receives hundreds of thousands of dollars and is allowed to over-ride the rules of the Animal Welfare Act, rendering it completely useless. You have given Gene Sackett hundreds of thousands of dollars to torture over two thousand baby monkeys for 30 years in the same repetitive way while he enjoys "studying" their agony. Michael Mustari mutilates babies' eyes and gets over $2 million in grants for this insane butchery. Sandra Juul suffocates babies and kills them at age 4 months when she tires of watching them suffer so she can begin again to suffocate younger babies. Over $3 million for her for her sadistic crimes.

This is only a small portion of the torture perpetrated by these and other vivisectors in the lab. The glass tube restraints and stereotaxic devices alone are hideous instruments of torture even as the vivisectors mutilate the babies. You know and the vivisectors know that their cruel experiments cannot be extrapolated to humans. The vivisectors continue to commit these crimes against humanity because of greed and because they are sadists. Our question to you is; why do you and the NIH continue to give our tax dollars to these monsters? How can you possibly defend this scientific fraud and brutality? Torturing these babies must stop now until all vivisection is abolished.