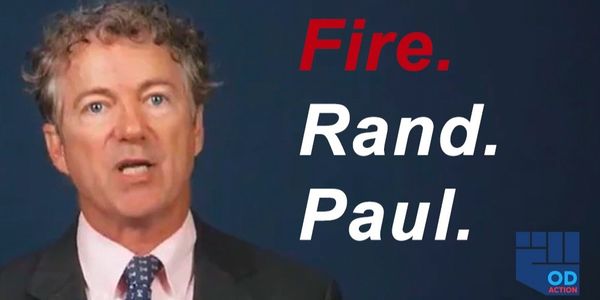 Demand the Senate remove Rand Paul from his committees for inciting violence against Dr. Fauci!

The utter depravity of Republican efforts to exploit the COVID-19 pandemic for their own selfish gain was put on full display in a Senate committee hearing when Dr. Fauci called out Senator Rand Paul (R-KY) for inciting threats against his life.

"I have threats upon my life, harassment of my family and my children with obscene phone calls, because people are lying about me," said Dr. Fauci.

Paul has spent the past few months relentlessly attacking the face of America's fight against the ravages of the COVID-19 virus, abusing his position on the Senate Health, Labor, Education, and Pensions Committee to paint Dr. Fauci as the villain in an anti-science conspiracy theory that is costing lives.

Add your name to demand the Senate immediately act to remove Rand Paul from his committees, which he has used to threaten Fauci and endanger those who buy into his lies!

As if that wasn't bad enough already, Paul has even been fundraising off of his smear campaign!

This kind of behavior from a US Senator is beyond unacceptable. Not only is it a disgrace to the office that he holds, it's an appalling betrayal of the Hippocratic oath Paul supposedly swore as a medical professional.

Rand Paul's reckless, self-serving behavior is a clear and present danger to both the health of the American public and to the safety of one of our most important public servants. It is critical that we strip him of his bully pulpit before he can do any more damage.

Sign now to demand Rand Paul be fired from his committees!