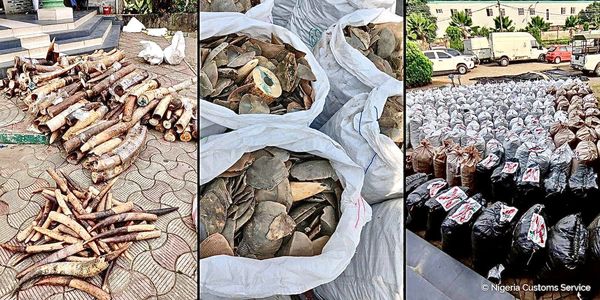 Authorities found the body parts of 15,000 dead pangolins in hundreds of bags. Shut down this criminal wildlife trafficking network now!

Pangolins may look like reptiles or anteaters, but they're actually more like Medieval Mammals, covered in skin that's made up of individual scales, not too dissimilar to wearing a constant plate of armor. These big-eyed creatures are extremely shy and increasingly rare — especially now that they're being hunted, poached, and dismembered into extinction.

But even as pangolins die off, their scales remain in high demand. With the appearance of large, soft beach seashells, these animals' scales are highly prized and therefore torn from their bodies largely to make jewelry, or to brew traditional medicines. They're also increasingly being used as a "substitute" for elephants' ivory — but neither of these animals' bodies should be ripped apart for so-called "cures" or for clothing accessories.

Sign the petition to demand government action to save the pangolins before it's too late!

Upwards of 50% of the main "pangolin scale" busts are connected to one high-profile, international network of criminals that operates, among other places, in Nigeria. Fortunately for this endangered wildlife species, Nigerian authorities have been quick to act, investigating and arresting a number of individuals affiliated with this criminal organization and seizing their blood-stained booty.

Most recently, this summer, the Nigerian Customs Service worked with animal welfare groups to track down three traffickers who are high-ranking within this network. When they arrested these individuals and raided their hideout, officials confiscated 196 huge bags of dead animal parts, including more than 7,000 kg of pangolin scales and 4 kg of pangolin claws — as well as nearly 900 kg of ivory from murdered elephants. That comes out to around 15,000 dead pangolins, their bodies ripped to pieces and thrown in a bag.

This is a HUGE stockpile, and while it both means authorities successfully interrupted a big trade, it also means many many animals died to create such a gruesome collection — and many, many people were involved.

Unfortunately, though, the fight to save these animals' lives isn't over yet, and this network still remains in operation. Now that a number of wildlife traffickers have been caught, it's time for the Nigerian government to investigate all of these individuals' connections and bring down this entire wildlife-killing ring!

Sign the petition to thank the Nigerian government for their work to save pangolins' lives, and urge them to continue investigating this illegal trafficking network until it is shut down for good!
Sign Petition
SHAREShare this petition with friends!TWEETEMAILEMBED
Sign Petition
See more petitions:
You have JavaScript disabled. Without it, our site might not function properly.