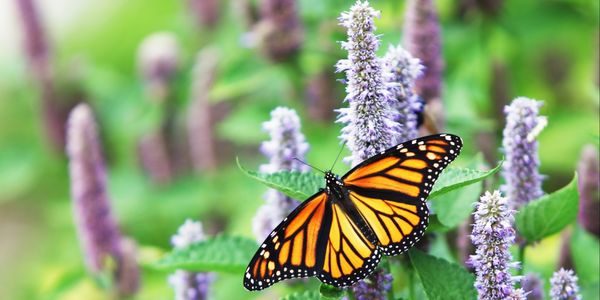 Will Authorities Step in to Save the Iconic Monarch Butterfly

"The king is dead." In just a few short decades, that's what we could be saying if we don't act to save the majestic monarch - the king of butterflies.

Like the swallows of San Juan Capistrano and the humpbacks of Monterey Bay, the monarch butterflies that flock to Pacific Cove and other parts of California are part of state legend. Each year, the insect makes a 3,000-mile trip from as far north as Canada to California and Mexico. Traditionally, they numbered in the millions, filling the air with color and, when they perch on the trees, the swarm's beating wings make the forest look as if it were aflame But for the past two decades, the woods haven't "burned" as bright. Each passing year, there are fewer butterflies. According to some studies, the population has dropped by as much as 80%.

Sign to urge the U.S. Fish and Wildlife Service (FWS) to protect the monarch under the Endangered Species Act.

The butterflies used to arrive in California in numbers of up to 4.5 million, but this year, just 29,000 graced the state with their presence.

The insects are battling a plethora of threats from dangerous pesticides and herbicides that can kill both them and milkweed, their main food source. They are also losing the battle for habitat. As human populations grow, the need for housing and more development has encroached upon the traditional territory of the butterflies, meaning each year they return from the north, they have less and less space to winter.

But perhaps most damaging is the steadily growing threat of climate change. As governments fail to act, the globe gets warmer, disrupting the cycle of seasons that butterflies once used to perfectly time their long migration. Before they would arrive in time to catch the blooming springtime flowers; now that is not guaranteed.

Something must be done to save this iconic species. If we sit on our hands, we will surely lose them within the next few decades. Currently, the FWS is deciding whether or not they will list the monarch on the Endangered Species List. It is hard to imagine that the FWS doesn't believe that the butterfly doesn't deserve protection, but we cannot just sit back and hope for action. We must be proactive. That's why we are asking you to sign this petition to the FWS, telling them you want the monarch butterfly to be protected now. Please sign today.
Sign Petition
SHAREShare this petition with friends!TWEETEMAILEMBED
Sign Petition
See more petitions:
You have JavaScript disabled. Without it, our site might not function properly.