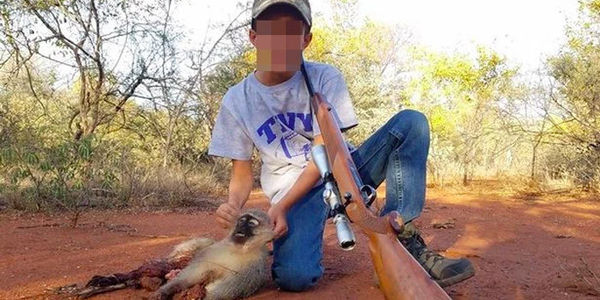 Children Are Being Taught to Trophy-Hunt Helpless Animals, and Then Show Off in Photos. Stop This Now!

If you thought trophy hunting was bad, then you're not going to like the most recent news.

We all know by now that various callous, money-hungry companies exist that cater to rich international tourists who want to feel powerful by murdering something innocent and wild. Charging tens of thousands of dollars, these groups arrange for guns, outings, and the cold-blooded deaths of specific desired animals.

But one company — Africa Hunt Lodge in South Africa — takes it a step further. They also arrange these trophy hunts for children.

They even brag about it on their website: "We can accommodate hunters of any age and experience level. We love to have 1st time hunters join us. We take great pride in helping to educate children and beginner hunters about the responsibilities of hunting." Their website also features dozens of photos of murdered animals, while waxing eloquent about all the "beautiful animals you will be able to hunt!"

Some of the most popular "hunting packages" include tours designed to maim and kill baboons and vervet monkeys, as they are cheaper to slaughter than, say, a lion. Africa Hunt Lodge charges £81 ($101 USD) to help you violently assault a vervet monkey and take its lifeless body home as a trophy.

In fact, one recent trophy hunting tourist in South Africa brought along their young child, Nolan, on one such vervet monkey hunt. Their child successfully slaughtered the small animal, a relative of humans. Then, they snapped a disgusting photo: little Nolan, kneeling next to his "prize," grinning and holding up his dead and bloodied monkey by its ears as though it were a toy.

This is a hideous message to be sending to any child — suggesting that murder and conquest are positive things to strive for.

In recent years, Old World primate populations have plummeted from being in the millions to now, just 250,000 individuals. But these types of hunts are still legal until international law.

These perverse trophy hunts designed for children must end now. Sign the petition!

Care2
Children Are Being Taught to Trophy-Hunt Helpless Animals, and Then Show Off in Photos. Stop This Now!
SHARETWEET