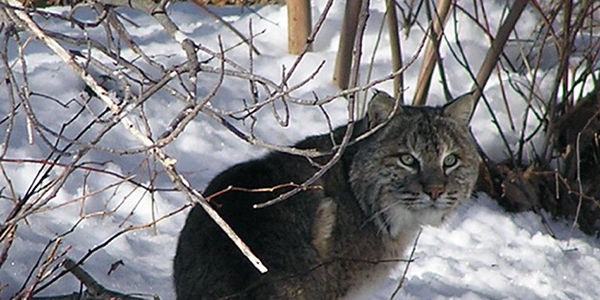 Save the Bobcat in NEW HAMPSHIRE Residents Only Sign!

Please don't sign if you don't live in NH. We appreciate your love for bobcats, but our government needs a list of just local signatures. If you would like to express your support for bobcats but don't live in NH, please sign this petition instead, and thank you! Also we want to let you know that once we reach 9,000 signatures, or whatever the max. is,  the number will increase and it will keep  growing.

Update: At the Oct 14, 2015 NH Fish and Game Commission meeting they decided to go to rule making on the hounding, trapping, and baiting of bobcats proposal. We need your help!  to show NH Fish and Game this is something the NH public doesn't want. We have one more chance to Save the Bobcat in NH. The Rulemaking Hearing is scheduled for Feb. 1, 2016. At that hearing this petition will be given to the F&G Commissioners as testimony to show them there is wide support to protect the Bobcat in NH. For more info email voicesofwildlifeinnh@gmail.com and keep posted at the Save the Bobcat in NH Facebook page.

The bobcat in NH is under attack! The NH Fish and Game Commission recently announced it will consider opening a hunting and trapping season against bobcats, which have not been hunted or trapped since 1989 due to a devastated population. This consideration comes after a four-year bobcat study conducted by the University of New Hampshire. Many citizens contributed by reporting sightings of these elusive wild felines. The results of the citizen contributions, made in good faith out of respect for this beautiful creature, have been used to create this backwards proposal.

We must speak up to protect the bobcat! Otherwise F&G and trappers will be the only voices heard - and their intent, now out in the open, is to exploit bobcats by selling licenses and furs/pelts. For 4 years, this true intention was shamefully kept secret from the public.

Meanwhile, a group of NH school children passed legislation (2015 House Bill 423) to designate the bobcat the official state wildcat. What a tragic dismissal of their youthful enthusiasm it would be if this beloved state cat were killed again. This petition will be used to tell NH Fish & Game and the legislature that the NH public DOES NOT want our bobcats hunted and trapped!

Care2
Save the Bobcat in NEW HAMPSHIRE Residents Only Sign!
SHARETWEET