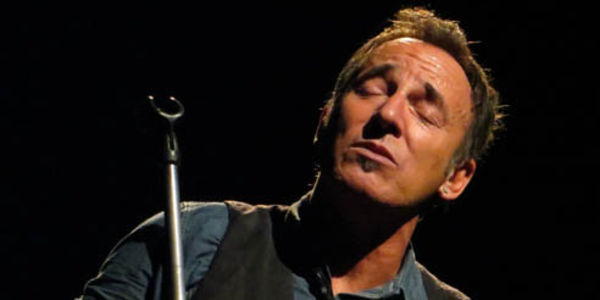 Last week, Backstreets first reported that download concert recordings were going to be made available as early as this tour. There was much celebration in E Street Nation as this is something diehard fans have wanted for a long time.

On January 17, it was announced that downloaded concert recordings would be available starting with the South African tour leg. But, it was also announced that fans would have to buy a USB wristband for $40US to be able do it.

So, you have to order an item to be able to download a show? Yes, that's right.

To make matters worse, the shows are only being offered in a lossy audio format, MP3, not a lossless format like FLAC which provides the user with a higher quality recording.

Compared to the cost of other high-profile bands and performers like Pearl Jam, Metallica and John Fogerty, the $40 price tag is FOUR TIMES more than what these other artists charge for an MP3 version of their shows.

While providing the casual fan with a nice souvenir of the show they attended, this system does nothing to take care of the diehard fans or the completist fans who want to collect a large number of shows.

We are asking that, in addition to the Wristband option, that Bruce offer his diehard fans, many of whom go to multiple shows in multiple cities travelling hundreds if not thousand of miles to see him and the mighty E Street Band, options that include better quality recordings at more affordable prices.

read petition letter ▾
Our initial sentiment when Backstreets first mentioned on Facebook last week that downloadable concert recordings for this year's tour would be avaialble was "HALLELUJAH!!!!" as many of us have long been willing to pay for a high quality official recording of Bruce's shows.
At this point, however, we're really scratching our heads.
The concept that was announced certainly has its merits.
For the casual fan who may attend only one show per tour and wants a souvenir recording of the show they attended, the wristband concept can be a great one.
For the diehard fans who attend many shows in many cities and would love to collect all the shows they attend or perhaps even the entire tour, the wristband concept is a terrible idea as it is simply cost prohibitive at the cost of $40 per show for a product that is audibly inferior to what could be offered.
We simply want to urge you to consider the broad spectrum of fans as this program rolls out.
As a diehard fans who have collected live Springsteen concert recordings for a while, we know what we would like to see. We want to see options available for all types of fans.
So, offer the souvenir wristband for the casual fan, but also offer direct downloads (no USB wristband required) in multiple formats (MP3, FLAC, AAC, ALAC, etc.) for other folks for between $10 and $20 per show and even offer a tour subscription or box set on disc (like Pearl Jam does) for the completists. Some of us would gladly pay a couple hundred bucks to be able to download each and every show from the tour in a high quality lossless format like FLAC or get physical CDs created from a lossless format.
Why is it important to also address the diehard and the completist market segments? Simple. Because the failure to do so would be an costly mistake. If a lossless format isn't offered, anyone who has been collecting bootlegs over the years will not be interested in buying shows sold only in a lossy format like MP3. If the cost is too high, fans will pool and share shows or they will continue to rely on audience-sourced bootlegs.
Please look at what Pearl Jam, Metallica and even John Fogerty are doing! Here are a few links as examples:
http://www.johnfogerty.com/news/download-tonights-show/
http://www.livedownloads.com/live-music/0,9979/John-Fogerty-mp3-flac-download-11-9-2013-Toyota-Presents-Oakdale-Theatre-Wallingford-CT.html?utm_source=nugs.net&utm_medium=livedownloads
http://pearljam.com/goods/index.php?cPath=11_13
http://pearljam.com/goods/product_info.php?cPath=11_13&products_id=2318
http://www.livemetallica.com/
http://www.livemetallica.com/live-music/0,443/Metallica-mp3-flac-download-2-23-2013-Soundwave-Festival-Brisbane-AUS.html
Many fans are already turned off by the wristband option simply due to the high price!
PLEASE DO NOT LEAVE DIEHARD AND COMPLETIST FANS OUT OF THIS POTENTIALLY FANTASTIC PROGRAM!!!!!!!!!!! Please consider all fans and do this the right way!
Thanks for considering our suggestions.
Sign Petition
SHAREShare this petition with friends!TWEETEMAILEMBED
Sign Petition
See more petitions:
You have JavaScript disabled. Without it, our site might not function properly.