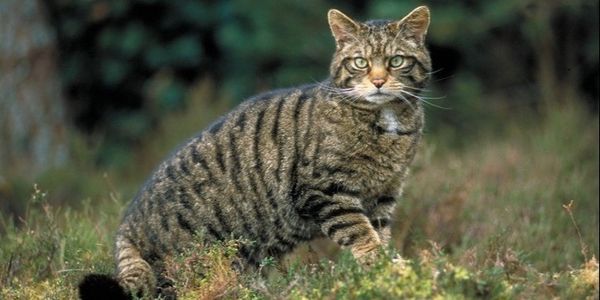 Help save the Scottish Wildcat

Nobody knows exactly how many pure-breed Scottish Wildcats there are left in Scotland but estimates range from 35 to 400. They are certainly at serious risk of extinction.

The main threats to their existence are a lack of habitat due to deforestation, and breeding with feral domestic cats which produces hybrids, so the Scottish Wildcat breed is diluted.

Please sign this petition to demand more reforestation in Scotland, specifically focused on increasing the habitat for Scottish Wildcats, and for more government funded mass neutering programmes for feral domestic cats. This should be accompanied by increased breeding and release of pure Scottish Wildcats.

Some of these Government funded programmes already exist, but much more needs to be done to ensure there are enough Wildcats being bred and protected in the wild.


The current status of the Scottish wildcat is largely unknown, numerous SNH led attempts to complete a national survey have been dogged with poor funding and forcing of poor methodologies on ecologists attempting to do the work.

Two serious attempts over the last decade have attempted to make an estimate by looking at a sample of animals that look like wildcats, identifying how many of them actually were pure wildcats, and then extrapolating that out according to an estimate of how many hybrids there are in Scotland that look similar to wildcats. Obviously, there are substantial margins of error in working this way; no one is certain how many hybrids there are and samples have not been able to take variations in behaviour over different habitats into full account.

A team led by Oxford University WildCRU estimated in 2004 that 400 pure wildcats could be an accurate number, and this was widely accepted by conservationists, though SNH have wavered regularly between supporting the figure and quoting very different, considerably more substantial, figures that no other experts agree with.

The second attempt came from the Scottish Wildcat Association in 2012 coming to a figure of 35, whilst the SWA accepted there was certainly a considerable margin of error, they also point out their use of a substantial sample (almost 2000 cats) and that even if there were ten times the number of wildcat-like hybrids estimated that would still extrapolate to a critically low number of 350 pure wildcats. In the absence of definitively verified evidence of a pure wildcat at any point in the last decade, the number seems likely to be towards the lower end of this scale.

A key thing to understand in all of this is that only a fraction of the Scottish Highlands has been properly surveyed for wildcat presence; a handful of estates in the Cairngorms National Park and the Wildcat Haven region, there are vast areas which have had little survey work but offer very favourable conditions for pure wildcats.

As part of the SNH Scottish Wildcat Conservation Action Plan more survey work is being carried out, however the methodology being utilised is not fit for purpose and was designed to do something else with wildcats entirely; a region surveyed using the methodology returned results of no wildcats, no hybrids and no feral cats, a follow up survey by the Wildcat Haven project found numerous ferals, hybrids and several potential wildcats.

Collective knowledge of surveying, speaking with people who work regularly in rural and wild Scotland, attempted estimates and data such as camera trap records and eye witness sightings all suggest there are considerable numbers of feral cats, certainly thousands of hybrids and extremely few pure Scottish wildcats; the clearest hope that the wildcat still survives are the vast unsurveyed landscapes, and various hybrids recorded which are so close to the pure form that it either must still exist, or has gone extinct sometime in just the last few years.

The primary threat to wildcats is hybridisation; cross mating with the abundant domestic feral cat and hybrid population which gradually dilutes away the wildcat genes until only feral cats are left.

It is important to note that this is not 'evolution'; domestic cats are only here because we created and brought them here, they are only in the wild because of lazy ownership, and as a non-native species from a chain of evolution in a very different ecology they create considerable damage in the ecosystem through over-population, over-pressure on prey species and conflict with rural business.

From their own point of view feral cats in Scotland live a miserable, short life which often ends unpleasantly in starvation, freezing to death, or being caught in a snare. The population number is maintained only by a phenomenal rate of reproduction and consistency in irresponsible human ownership.

For the sake of the wildcat, feral cats and the ecology itself, it is highly desirable to remove those feral cats from wild places and rebuild the wildcat population, which is well capable of thriving again.


Other issues that have caused problems for the wildcat in recent centuries include;

Deforestation of the British Isles which destroyed their preferred habitat; though the modern wildcat has adapted well to living in a multi-habitat environment it appears to be forced to live at very low population density; native reforesting is important to re-building a naturally sustainable population.

Human persecution for fur and later branding them as a pest species undoubtedly had an impact, though it appears it may have been less severe than is often believed. A study of wildcat skins collected in museums prior to legal protection, mostly gathered from farmers and gamekeepers controlling cats on their land, revealed that a very small proportion were wildcats, even reaching back 150 years to a time when museums would pay for the best looking specimens. In the modern era, persecution undoubtedly still occurs, even if 'accidentally' by use of snares (a ban on which would benefit a wide range of wildlife), but many shooting estates are critical to protecting the pure wildcat and interested in having it permanently resident. Times change, and the focus should be on hybridisation and reforesting.

Feline diseases are far more common in a landscape dominated by comparably social feral cats, however the low number of wildcats, apparently low population densities and unsocial behaviour make disease a relatively minor threat, along with issues such as roadkill; many roadkills are collected for study and no pure wildcat has turned up as a result over the last five years. Whilst they certainly use roads as territorial boundaries, they may simply not cross them very often, particularly very busy roads such as the A9.