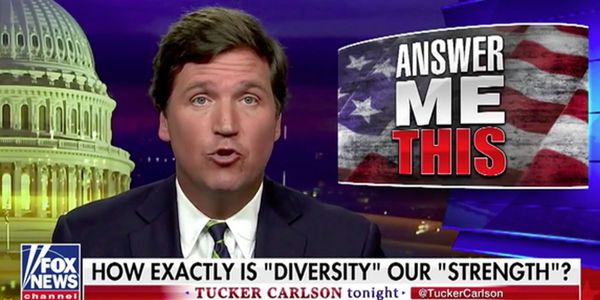 Fox News personality and alt-right apologist Tucker Carlson just can't seem to help himself from coming to the defense of neo-Nazis, white supremacists and other hate-mongering racists.

In early August, days after an avowed white nationalist murdered 22 people in El Paso, Carlson pugnaciously called the existence of white supremacy a lie, likening it to the "Russia hoax" on his primetime TV show. Criticism was predictably swift and unforgiving – save for Fox News, of course. Carlson took a previously scheduled vacation, then returned to his studio chair for further far-right bloviating without so much as a slap on the wrist from his employers.

Carlson's position is neither new nor surprising. He is on record stating that immigrants make America dirtier and poorer, likening their presence in America to an invasion. Neo-Nazi Andrew Anglin, founder of the white nationalist website Daily Stormer and general spewer of hate famously called Carlson "literally our greatest ally." A quick web search for troubling Carlson sound bytes or pull quotes puts any doubt to rest, which raises a really simple, important question – why is this guy on TV?

We cannot excuse or allow complacency when it comes to hate.