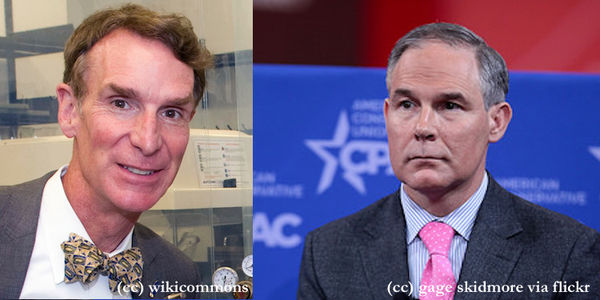 WOW. Just WOW. After telling his Senate confirmation panel, "I do not believe that climate change is a hoax" and that "Science tells us the climate is changing and human activity in some matter impacts that change," the head of the EPA (you know, the federal agency charged with limiting greenhouse gas pollution) got enough votes to squeak into power.

After he got the job, he went on CNBC and said: "I think that measuring with precision human activity on the climate is something very challenging to do and there's tremendous disagreement about the degree of impact, so no, I would not agree that it's a primary contributor to the global warming that we see," referring specifically to the role of CO2 emissions on climate change.

Carbon dioxide is the primary greenhouse gas that is contributing to recent climate change.

The vast majority of climate scientists agree with the EPA (the organization, not its new administrator).

It's time he gets the facts straight. Bill Nye the Science Guy has helped millions wrestle with challenging scientific concepts. Sure, most of those folks were kids watching his popular television show, but we are sure Bill can get Administrator Pruitt to hear the truth, despite the political contributions from polluters whispering in his ears.

Sign and share this petition today, so we can send Scott Pruitt to sit down with Bill Nye ASAP.