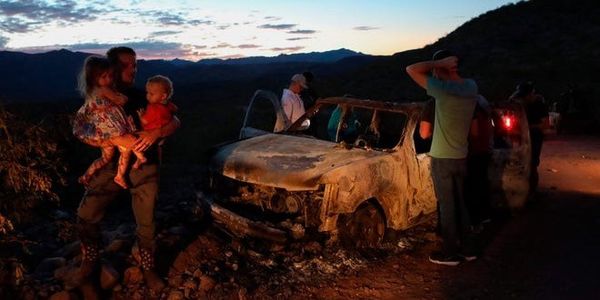 Mexico's homicide rate last year was 35,000, this years will exceed that. It is no longer a country run by laws, but lawlessness of the most brutal and corrupt kind. The permissive government leaders who are either on the payroll of the cartels, or by inaction complicit in their crimes.

On the morning of November 4th, 2019, just 50 miles off the border with Arizona, in Sonora state, we witnessed a dastardly and cowardly slaughter of U.S. citizens – three  women, four children, and two 8-month-old twins – when their three SUVs encountered cartel members near the town of Bavispe. One of the vehicles caught fire, burning the bodies of one mother and her four children beyond recognition.

One of the victims, Rhonita Miller, 30, was headed to Phoenix to pick up her husband, who works in North Dakota and was returning to celebrate the couple's anniversary. Her car broke down, when the gunmen opened fire on Rhonita and torched her car.

Rhonita was killed, along with her four children: Howard Miller, 12; Krystal Miller, 10; and twins Titus and Tiana Miller who were less than a year old. They were burned to mostly ashes.

About ten miles ahead, the two other cars were also attacked, and the two other women, Christina Marie Langford, with her seven-month-old baby Faith in one vehicle, and Dawna Ray Langford with nine children in hers.

"They both were fired upon from ahead and Christina jumped out waving her arms to let the attackers know that it was women and children in the vehicles. She gave her life to try to save the rest. Dawna and two of her boys were also killed in the gunfire," Kendra Lee Miller, whose sister-in-law Rhonita Maria Miller was gunned down and burned with her children in ther SUV.

After witnessing his mother and brothers being shot dead, Dawna's 13-year-old son hid his six other siblings in the bushes and covered them with branches to keep them safe while he went for help. The boy arrived in La Mora at around 5:30 p.m., giving the first news to local authorities.

Christina's baby Faith was in the vehicle in her car seat, which looked to have been hurriedly placed on the floor of the vehicle by her mother for protection. Somehow she had remained untouched and alive.

Eight children survived, some seriously wounded, including a 9-month-old who was shot in the chest and a 4-year-old shot in the back.

Sonora execution of the American families was at least the fifth massacre of civilians under Mexican President Andrés Manuel López Obrador.

Some of the recent statistics.

In July 2018, Tatiana Mirutenko emerged happy from a bar in an upscale part of Mexico City after a night of dancing. Seconds later, the 27-year-old Chicago native was dead — hit by a stray bullet from two men on a speeding motorcycle. Tatiana, a slim blonde who worked for a pharmaceutical company in San Francisco, returned home in a body bag, becoming one of the 16,399 homicides recorded in the country in the first seven months of this year, according to statistics collected by Mexican law enforcement.

The two men had been mowed down in a barrage of gunfire on a sunny afternoon in October, and although tourists ran for cover as bullets flew, many returned to the beach minutes later. There, police had cordoned off the corpses, which lay bleeding at the entrance to a popular seaside restaurant.

Months earlier, in April, stunned beachgoers on nearby Caletilla Beach stumbled over a bullet-riddled fisherman's body as it washed ashore. Police said he was likely killed in a fight over drugs.

Violent crime is so out of control in Guerrero state, where Acapulco is located, that last year the US State Department warned Americans to stay away. Guerrero and a handful of other Mexican states have the same Level 4 "Do Not Travel" advisory as Syria, Afghanistan and Iraq.

But despite these warnings, visitors have not stayed away from the country.

Last year, there were more than 35 million visitors to Mexico, an increase of 9 percent over the previous year, according to the Madrid-based United Nations Tourism Organization.

In October 2018 — the last month for which statistics are available — Mexico received 688,000 visitors from the US, compared to 642,200 in October 2017, a 7 percent increase, according to data compiled by the Mexico Tourism Board.

In Playa del Carmen in January 2017. Two Canadians, an Italian and a Colombian were shot dead at the Blue Parrot nightclub. The tourists were the victims of stray bullets after a gunfight broke out among nightclub patrons.

And it's not just bullets that tourists fear. Even black-market tequila reportedly has killed tourists.

Abbey Conner, a 20-year-old University of Wisconsin-Whitewater student, drowned in a shallow pool at the Hotel Iberostar Paraiso del Mar in Playa del Carmen in November 2017 after drinking tequila shots at the all-inclusive, upscale resort with her older brother, Austin.

Even the savviest tourists who have traveled dozens of times to Mexico have recently found themselves in terrifying situations in a country where the cops are often so corrupt that tourists are actively discouraged from seeking police assistance if they are the victim of a crime.

In July 2018, a 41-year-old mother from Astoria, Queens, flew to Cancún with her Mexican-born husband and two young children and barely escaped becoming a drug mule for a Mexican cartel.

The woman, who did not want to be identified, said that after leaving a high-end, all-inclusive resort in Cancún en route to Mexico City, she found that someone had placed two bags of white powder in her backpack. She discovered what she thought was cocaine when she arrived at an Airbnb in the Mexican capital and emptied out her backpack. Her husband had already returned to the US for work but was planning to meet up with her again in Mexico City, she said.

Patricia Protage has sworn off Mexico, where her family has vacationed for years. She said she wished she had known more about the all-inclusive resort in Cancún where her 19-year-old son went on spring break three years ago.

The day after he arrived, the 185-pound rugby player found himself lying on the floor of a filthy jail cell. "He can't remember anything that happened after he took his first sip of his second beer," Protage told The Post from her home in Seattle. The local police told him they had found him face-down in a ditch and asked for $300 to spring him from jail. Although his wallet had been stolen, his mother said the police handed him his student card and driver's licence.

Is it safe to travel to Cancun? Playa del Carmen resort in Mexico issued with a US State Department warning after murder spree. Escalating drugs cartel violence rocked the Mexican holiday hotspot of Cancun after nine people were murdered in a 36-hour period in April 2018. More than 100 people have now been killed in the popular beach resort since the start of 2018.

In June 2019, the US State Department issued a "Level 2" advisory warning to travellers to "exercise increased caution", adding "violent crime such as homicide, kidnapping, carjacking and robbery is widespread".

There have been a number of violent carjackings and robberies along the Pacific Highway.

Those travelling in large camper vans or sports utility vehicles (SUVs) have been targeted in the past. Theft on buses is common.

Passengers have also been robbed and assaulted by unlicensed taxi drivers including in Mexico City.

There have been incidents of rape on urban buses (micros) on routes in the south of Mexico City.

Travellers have been robbed or assaulted after being drugged.

There have also been reports of tainted alcohol causing illness or blackouts.

Pick-pocketing is common on the Mexico City Metro and other tourist hotspots.

According to preliminary numbers from the National Public Security System (Sistema Nacional de Seguridad Pública – SNSP), 17,608 people were killed in Mexico from January through June 2019, Animal Politico reported. This represents a nearly 5 percent increase when compared to the same six months in 2018.

One of the key factors affecting violence in Mexico in recent years is likely the rate of political turnover. President Andrés Manuel López Obrador's victory in the 2018 election was the culmination of a years-long collapse of the Institutional Revolutionary Party (Partido Revolucionario Institucional – PRI), in which the previous ruling party lost control of the presidency, various governorships and statehouses, and hundreds of local governments.

According to pioneering research by Mexican academics Sandra Ley and Guillermo Trejo, political turnover has long correlated with increased rates of violence. The logic behind their findings is clear: Criminal groups establish modes of coexistence with governments –ranging from tacit acceptance to outright cooperation — which tend to promote underworld stability.


In Memory of November 5, 2019. American Citizens' Massacre in Mexico.

All shot and burned in their vehicle. Only ashes and a few bones remain.