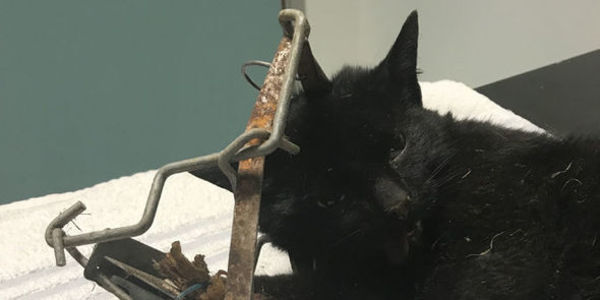 The Fenn Mark 6 Rat Trap just claimed another victim, and this time it wasn't a rat. While no animal should be subjected to the torture of a slow death between the metal jaws of an animal trap, it's even more shocking when the victim is a beloved pet.

That's what recently happened to one unlucky pet cat in Wednesbury, United Kingdom. According to witnesses, after the jaws slammed shut around his neck and throat, he flopped and jostled around frantically as it tried to free itself from the metal clasps.

The pain must have been unimaginable and the cat died a gruesome death as people were unable to help.

The Fenn Mark 6 is not currently illegal however it is supposed to be used under strict controls in order to avoid tragedies like the one described above. Trappers are prohibited from using them on non-target / non-pest species and they are supposed "to be set in an artificial or natural tunnel which is fit for purpose and secured to the ground, to avoid catching non-target species."

Regardless of their legality, using a spring trap like the Mark 6 is not a humane way of dealing with animals some people regard as pests. They cannot be trusted to reliably kill the intended target instantly without pain, which means that it might suffer for minutes, hours or possibly days before it expires.

For example, the Agreement on International Humane Trapping Standards (AIHTS) — which "attempt[s] to establish and enforce an international standard on humaneness for traps" — recommends banning Fenn traps for stoats, a ferret-like animal.

The UK will implement the AIHTS by 2019 but the new rules will likely only prohibit Fenn trap use on stoats. That's not right, these traps should be prohibited outright, not just for use against stoats. They are simply not humane.

No animal should suffer the way this poor cat suffered. Not even animals like rats which some people may find distasteful.

That's why we are asking the Department for Environment, Food and Rural Affairs to protect all animals and ban the Fenn trap altogether. Please sign and let's get these cruel contraptions out of the UK.