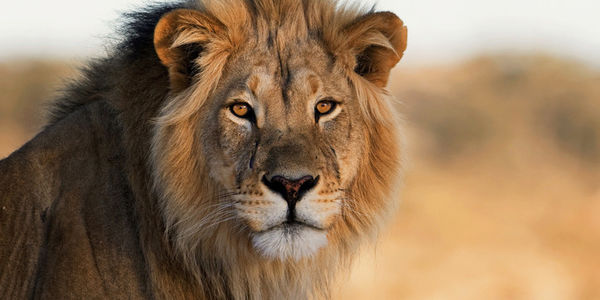 Lions Are Under Threat. A New Movie Demonizes and Maligns Them Anyway.

In the film, a man-eating lion stalks and targets Elba's character and his children. His only choice is to essentially go to war with it. And not far into the teaser-trailer, we can already see that Elba's character punches this (not real) lion!

Lions are already under threat. We don't need more movies villainizing vulnerable wildlife, and turning them into antagonists that humans must defeat.

What we really need is more conservation and protection for lions - not movies depicting them as mindless death machines. Universal Studios must set an example by donating a portion of this film's profits to wildlife conservation!

Lions are currently under siege from all sides: climate change and habitat loss, human construction, poaching, and more. Over the past 30 years, the population of African lions has diminished by upwards of 40%. The International Union for the Conservation of Nature (IUCN) has now officially listed African lions as "vulnerable." By now, lions have all but vanished in approximately 12 sub-Saharan African nations where they once roamed freely. It's clear that what these animals need is more help - not being maligned and personified as sinister human-killers.

While ultimately it seems that no animals were harmed on set, this type of premise - pitting a human family against a seemingly angry lion hellbent on destruction - could lead to people actually harming real animals out in the wild. Trophy hunting and poaching are sadly already big enough industries as it is, without having this extra push from demonizing wild lions!

Thankfully, there is a saving grace to this movie's message. Apparently the blood-thirsty lion is really just a survivor of vicious poaching campaigns, in which humans have tried unsuccessfully to murder it for its body parts. Traumatized by its experiences, it naturally adapts to see all humans as dangers and threats.

That doesn't make it okay that Universal Studios green-lit a movie in which the "villain" is a battered, hunted wild animal. And it doesn't make it okay to frighten the public by suggesting lions are our enemies. That can have very real life-and-death consequences for these animals. But if the studio wants to really make it clear that the REAL enemy is poaching, it should put its money where its mouth is.

Just last year, in 2021, Universal Studio raked in approximately $714 million in revenue in the U.S. and Canada. That's a lot of money - and even just a fraction of that amount could do untold help for poached wildlife. Tell Universal Studios that if it's going to make money off of demonizing lions or other animals, it needs to pay for wildlife conservation. It owes wildlife that much! Sign the petition now!
Sign Petition
SHAREShare With FriendsTWEETEMAILEMBED
Sign Petition
See more petitions:
You have JavaScript disabled. Without it, our site might not function properly.

Care2
Lions Are Under Threat. A New Movie Demonizes and Maligns Them Anyway.
SHARETWEET