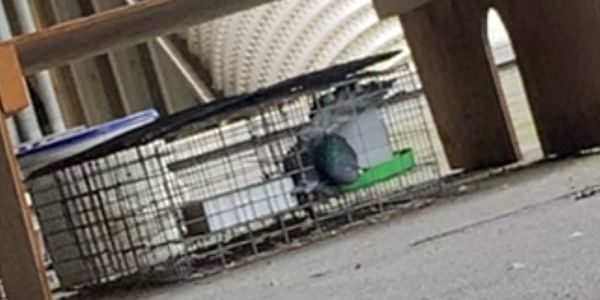 In 2020, a friend was completely traumatized and suffered from anxiety after witnessing Vancouver Atlas Pest Control trapping pigeons in her building parking area and suffocating them front of her eyes. Those pigeons had nest, some of the young one's starved to death in their nests after their parents were killed, my friend rescued couple of those babies after they were orphaned.

Around mid June 2021 as usual i was in Skytrain heading to work, from skytrain i noticed a cage and seeds around it on exit roof of Stadium Station Vancouver, and since i was aware of the incident that took place at my friend's building, I immediately knew it was a trap.
Few days later i noticed about 6 pigeons trapped in that cage, and that was the time when city was hit with heat waves. I called TransLink BC numerous times, they denied having any traps. Finally i stopped by that station to investigate if that roof belongs to another property, and i noticed parking lot attached to it, i called them they denied having any traps, and it was confirmed that roof was TransLink property and no one else could have access there except Skytrain staff.
Me and my friend continued calling and reporting the trapped pigeons and each time we had same response that they are investigating this matter.
Three weeks after i noticed them all dead inside that trap, i called to report but it was going no where, it seemed like they didn't care, and all the constant calling and emailing was useless. We also called wildlife rescue, Spca, even conservation officers, but no one seemed to care about pigeons. For me it was a living creatures who were lured there with seeds, then once they were trapped they were left to starve to death, and it was a slow death. I hired a photographer to take pictures of dead pigeons inside the trap from moving train. Although in images it's seen pigeons are dead but even it was hard for photographer to capture clear pictures from moving train with less than 3 seconds time.
Finally i decided to open a petition to make those who care aware of this matter and shared the pictures all around.

After that petition many others got involved and TransLink was getting numerous emails and phone calls from people all around the Canada. Finally they admitted having traps but denied cruelty. From June 2021 to June 2022, i have noticed dead pigeons numbers of time, and each time we took pictures because Spca wanted proof of cruelty, although we provided clear images of dead pigeons in traps, they didn't do anything except bouncing us around and giving us different numbers to call, and end result was absolutely nothing.
Finally we succeeded and they removed the traps from Stadium Station and placed it with OvoControl machine, it's been months they have the machine installed and no pigeons would go to eat. I don't understand the fact why they want to attract pigeons on Skytrain property with seeds or OvoControl to kill them later?
However traps in Commercial Drive Broadway Station was still there, and there are many hidden traps in different stations. I went down Broadway station capture closer images of traps which clearly showed there was no water, after I publish those images, they removed those traps. Month later they placed traps in other stations including Science world station which is right by park and pigeons including other birds always eat from there, i noticed Skytrain was putting seeds for weeks to attract them to the property, before placing the trap.
This seems like a never ending fight, these are the traps we noticed but there are many more neglected traps with dead birds in it. If these birds survive the traps either they are suffocated or their necks are snapped off.
I understand the growing population of these birds maybe problem but there are many other humane ways to deal with the issue, why do we choose killing over other solutions?
Once upon a time these harmless birds were war heroes, and today they are labeled as pest and killed in horrible manners. If not by pest companies, i seen adults kicking them, children scaring them away, resulting getting hit by cars on streets. City allows killing them at anytime, we rescued many who were shot with pellet gun, the cruelty against pigeons should stop.
Pigeons were domestic birds which were brought here for food, even in today's time many in European countries and around the world consume their meat, including some pest control groups who capture them to eat later, and when consuming their meat they are not pest, but to make business out of killing they are labeled as pest and fear of getting diseased from them are put in hearts of many. Although one getting strike with lightning has higher chance than getting diseased from pigeons.
Pigeons have always relied on human help and feeding, they are no different than stray dogs and cats in other countries, we do get upset when we see the ill treatment of others towards dogs and cats in those countries, but we treat some of our animals here worst than how they treat dogs and cats.
Here in Canada many cities announced ban on feeding these harmless birds, which leaves them with option of eating junks and human left overs, because cities life don't offer them seeds and they are naturally seeds eater, just like dogs and cats need proper nutrition not garbage, these birds take most of their nutrition from seeds. Putting ban on feeding will never stop people from feeding them, because they will come up with other ways of feeding, such as leaving seeds at night time which may also attract mice. It's unbelievable that city has such laws, meanwhile consuming drugs and alcohol is completely fine in public areas, such as parks etc. Bans like this will only create more conflicts and hatred between citizens, this should be removed.
Some European countries have come up with idea of building aviaries in public areas, where they created nests for pigeons, feed them there, and to control their population they humanely remove their eggs from nest and place it with fake eggs, This keeps them away from peoples balconies, businesses and other public areas. Why can't we do the same here in Canada?
The cruelty against pigeons should end and let's all fight against it together until there is end of it.
Sign Petition
SHAREShare With FriendsTWEETEMAILEMBED
Sign Petition
See more petitions:
You have JavaScript disabled. Without it, our site might not function properly.