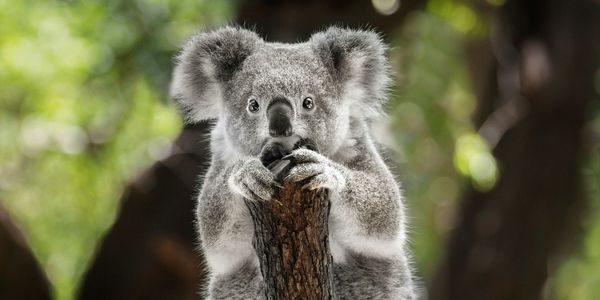 Climate Change is Dehydrating Koalas Until They Fall Off Trees, Unable to Cope

Climate change is drying out the planet, causing drought, famine, and even flooding when water can't absorb into parched, hardened earth. It's also dehydrating and killing off a precious endangered species: the koala.

Like many other places in the world, climate change has been serving Australia harsh blows, including record high temperatures and wildfires that have raced through human neighborhoods and animal habitats alike. But unlike humans, wildlife can't do anything to stop or reverse the climate change that is ripping apart their homes. They are voiceless, powerless, and fully at the mercy of whatever global changes we allow to happen.

Koalas are a perfect example. While they're otherwise very hardy creatures that have evolved to survive previous waves of heat, dry spells, floods, and more, they simply can't handle the level of intensity that they are now facing.

Dr. Valentina Mella, PhD, works at the University of Sydney as an animal behaviorist. She recounts how she's received countless messages and photos from Australians saying the koalas in their areas are so parched for water, the poor beings are climbing into humans' backyards and desperately lapping up water from birdbaths.

Even worse, the University of Sydney reports that "heat-stressed and dehydrated koalas" are "literally dropping from trees" due to severe lack of water.

We cannot afford to lose any more koalas! Around one hundred years ago, millions of these now-endangered animals climbed the eucalyptus trees and roamed their habitats. Now, however, experts estimate that only around 40,000 to 100,000 remain alive in the wild. Global warming-induced wildfires saw koalas being scorched and burnt alive over the past few years. And now these expert climbers are falling out of trees.

Things are only going to get worse. On Thursday, January 27, 2022, Australia recorded its deadliest day yet for heatwave-related deaths. Koalas are sure to be impacted, too. Yet the Australian government is still committing to further climate change-worsening activities, including fossil fuel drilling. At the end of 2021, just as the United Nations shared data confirming that we must end fossil fuel reliance, Australia's federal government began exploring the possibility of allowing more oil and gas extraction off their coasts. Such activities will destroy habitats and indisputably worsen global warming - meaning the koalas will suffer from this decision.

Tell the Australian government to commit to taking serious action to reduce fossil fuel extraction, and to ban any further drilling off their coasts! This is a major step that would help slow climate change, and give us a chance to save our koala friends.
Sign Petition
SHAREShare With FriendsTWEETEMAILEMBED
Sign Petition
See more petitions:
You have JavaScript disabled. Without it, our site might not function properly.

Care2
Climate Change is Dehydrating Koalas Until They Fall Off Trees, Unable to Cope
SHARETWEET