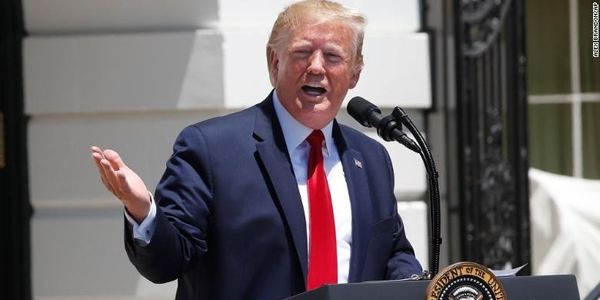 As if there was any doubt that the president of the United States is a racist, Trump took to Twitter and suggested that four American congresswomen – Reps. Alexandria Ocasio-Cortez, Aryanna Pressley, Rashida Tlaib, and Ilhan Omar - go back to the countries they came from.

First of all, three of the four were born in the United States. Ocasio-Cortez is from the Bronx, Pressley was born in Ohio, and Tlaib is from Detroit. As for Ilhan Omar, she was a refugee from Somolia who moved to Minnesota and was elected by her district to represent them in the United States Congress. He literally assumes because they're not white that they're not even "from" here; that's how deep-seated his racism is.

That's why it's fair to say that he's a white nationalist. Whether you agree with every word they say or not even one, all of them have every right to call themselves Americans, because they are.

But there is an insidious reasoning behind these attacks on these women in particular. He needs his supporters – the white, blue collars workers that make up his base – to feel as though they have nothing in common with these women, with brown and black people. If he can stoke enough resentment, can divert attention to our differences with bad faith attacks – even if they're not even based in reality – then his supporters won't have the chance to focus on their good ideas.

Trump knows these women are dangerous because if his base had the chance to hear, in good faith, what they represent, like healthcare for every American, like taxing millionaires and billionaires, like protecting the planet, then they would be likely to support them.

Trump needs to attack these women because that's his only defense against their good ideas. Even if they're outright lies, even if he's claiming that a woman born in Brooklyn isn't American, it's not about the truth. The cruelty is the point.

Granted, this should come as no surprise. From the days of suggesting that the Central Park 5 were guilty, even AFTER they were exonerated by DNA evidence, to starting the birtherism movement against our first black president, to predicating the launch of his presidential campaign on banning Muslims from entering the United States and calling Mexicans drug dealers and rapists, Donald Trump's entire life is steeped in racism. It's the way his career began and the way it'll end, and no amount of public shaming is going to change the way a virulently racist 73-year-old operates.

Rep. Steve Cohen (D-TN) has introduced a resolution of censure against Trump "for his racist and xenophobic comments" about Representatives Ocasio-Cortez, Tlaib, Omar, and Pressley. We, the undersigned, demand that Republicans stand up for the ideals of this country, regain their integrity, and vote to censure Trump for his disgusting behavior. Because, rest assured, silence in the face of such glaring racism is an endorsement of it.