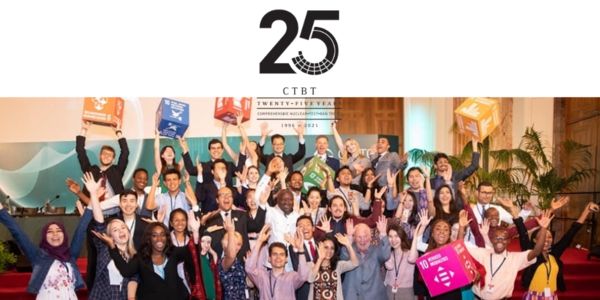 CTBTO Youth Group Statement on the 25th Anniversary of the CTBT

The Comprehensive Nuclear-Test-Ban Treaty (CTBT) opened for signature 25 years ago on September 24, 1996, after years of tough negotiations. Since the beginning of the atomic age, the world has seen over 2000 nuclear tests, which encouraged destabilizing arms racing and militarism. The signing and entry into force of the CTBT ensure a more peaceful world for current and future generations.

On the 25th anniversary of the CTBT, the CYG pays tribute to the achievements of the Treaty, which has made remarkable progress in completely eliminating the scourge of nuclear testing. The treaty is a key part of the global non-proliferation and disarmament architecture. It inhibits more countries from developing nuclear weapons and represents a meaningful step toward a world free of nuclear weapons.

Over the past 25 years, the CTBTO has proven its capacity to act as a comprehensive global monitoring system. Through state-of-the-art science and technology, and with the oversight of international experts, the Organization ensures that no test of a nuclear device goes unnoticed by the international community. The CTBTO will continue to grow, innovate, and expand - the CYG represents the CTBTO's commitment to education, outreach, and development as a diverse international community of young people with a common goal: ending nuclear testing.

Our work is not done. Many CYG members are the same age as the CTBT, but the Treaty has yet to enter into force. This limits the capacity of the international community to detect and investigate nuclear tests and leaves the door open to a future where we are stuck in the past. We are grateful for the 170 countries who have already ratified the Treaty, and to the 185 that have signed it. We also call on the remaining eight Annex 2 countries to ratify at the earliest possible date.

The CYG is proud to work with the Group of Eminent Persons (GEM) to strengthen intergenerational dialogue and knowledge-sharing. We encourage senior leaders to include the perspectives and ideas of young people into their work and offer opportunities to the next generation of leaders to deal with the complex issues of today, in order to prepare for a better tomorrow.

We can only close the door to nuclear testing for good if we keep reminding our governments, communities, and leaders that this is one of the most urgent tasks before us. We wholeheartedly believe that a world without nuclear tests is a better world - the CTBT is our path to get there. Let's finish what we started.

The statement is translated into 9 languages, find them here: https://youthgroup.ctbto.org/node/2617

If you wish to actively engage in promoting the CTBT, join the CTBTO Youth Group: https://youthgroup.ctbto.org/