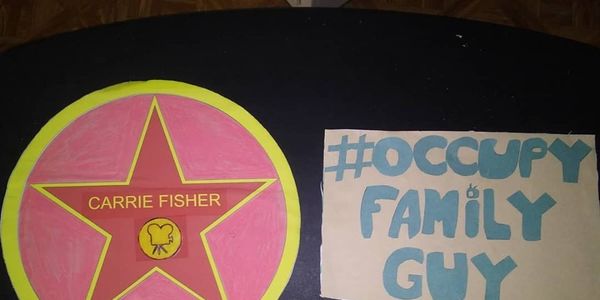 A Sub-Project of #AStarForCarrie
As a HUGE fan of the acerbically funny, decades-running adult animated comedy “Family Guy”, I must start a SECOND petition SUGGESTING Fox hire an ALL-FEMALE staff of writers for at least the one episode of the next season.

Carrie Fisher, who voiced “Angela“- Peter’s boss at the brewery- does NOT have a star on the Hollywood Walk of Fame, Seth MacFarlane does. I was wrong to assume that I would gain his support for #AStarForCarrie based on his apparent love of Carrie Fisher and Star Wars alone. I forgot to mention what’s in it for him…

Hiring a staff of ALL FEMALE writers on at least one episode of Family Guy would make a statement in the #MeToo era that Fox is making some drastic changes to rectify past abuses by lending a predominantly-male written series to a roster of brilliant female writers. Support for the #OccupyFamilyGuy (A Sub-project of #AStarForCarrie) petition would be some much-needed, positive PR to clear the smell of stale hot dogs…

I would like to be considered for a “Family Guy” staff position as a HUGE fan of the show and creatrix of this idea, but PLEASE hire these engenious established writers before considering a baby writer like me. #OccupyFamilyGuy, like #AStarForCarrie, is not about me. It’s about making positive changes for Women in Hollywood.

Seth MacFarlane has created some truly strong female characters on all of his shows, I believe he would adore this idea…

I believe Seth MacFarlane would agree with me enough to show up at his office with a petition… So, come join me! I’m not creating an online petition for #OccupyFamilyGuy, you have to come to Fuzzy Door Productions in Beverly Hills (during office hours) & sign it in person! There’s something so magical about an ink signature on a paper petition. It means you really believe in a cause. I believe the force is with me on this one…

Please check my blog for updates, I went to jail for this. I'm not giving up.

May the Force be with You!
Updates:
https://imaginationforsale.blog/2019/07/08/astarforcarrie-sub-project-occupyfamilyguy/
Sign Petition
SHAREShare With FriendsTWEETEMAILEMBED
Sign Petition
See more petitions:
You have JavaScript disabled. Without it, our site might not function properly.