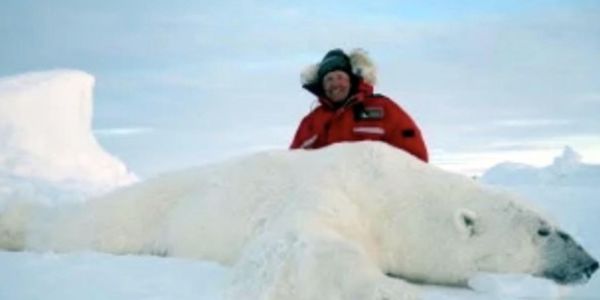 Polar Bear Numbers are Declining, So Why Does This Country Allow Them To Be Hunted?

Humans may not feel at home walking on ice, but standing on the ice of the Arctic Circle, the polar bear is king. Polar bears need ice to hunt their favorite prey, seals. Ice is also crucial for them to reach destinations that would otherwise be separated by sea. Without it, the bears stand little chance of survival.

That's why climate change is such a huge threat. The remaining 25,000 polar bears are losing habitat as the ice melts, their prey then is becoming more scarce and harder to find. Oil drilling, human encroachment, and other threats also play a role in their decline. In fact, in 2015, polar bears were designated "vulnerable" by the International Union for Conservation of Nature's the Red List. The classification indicates that the species is in decline and is supposed to serve as a wake-up call for governments to take action. Unfortunately, not all of them are listening.

Canada, where the majority of the world's polar bears live, allows people to hunt them for sport.

Hunting companies in advertise extreme hunting trips to Canada's Arctic to hunt the Earth's largest land predator. For around $45,000 the extremely wealthy can make a 12-day excursion to track and hunt a polar bear. The price includes the cost to have the animal taxidermied.

According to the Mirror, in recent years, more than 5,000 bears have been killed.

Normally, Canada allows Inuits the right to hunt polar bears since it is part of their cultural tradition, but some Inuits are selling their licenses to the highest bidder and hunters from all over the world, seem to be more than happy to hand over the big bucks.

This is unacceptable. We are no longer dealing with culture, this is cruelty and greed. As polar bears fight for survival, Canada has a duty to protect them, they shouldn't be handing out licenses to kill them.

Sign the petition and demand that Canada ban all polar bear trophy hunting today.
Sign Petition
SHAREShare this petition with friends!TWEETEMAILEMBED
Sign Petition
See more petitions:
You have JavaScript disabled. Without it, our site might not function properly.

Care2
Polar Bear Numbers are Declining, So Why Does This Country Allow Them To Be Hunted?
SHARETWEET