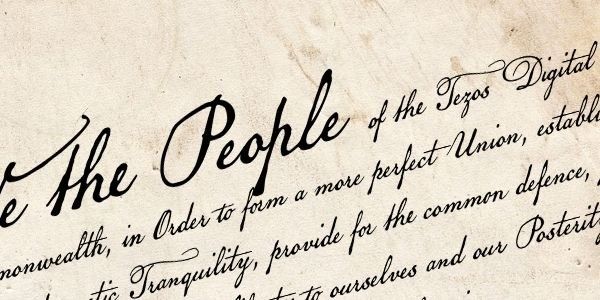 We, the undersigned, contributors to the Tezos Stiftung, a charitable foundation established in Zug, Switzerland, for the development and promotion of the Tezos Protocol and Network, hereby declare:

Charitable Contribution
1. We are cognizant of our participation in the Tezos Fundraiser, conducted in July, 2017, and per its terms, as a contribution towards the development, establishment and maintenance of the Tezos Protocol and Network;

Distributed Enterprise
2. We, the Tezos Community, are required to participate as a distributed enterprise in the governance and future development of the Tezos Protocol and Network through the software utility of a cryptographic token, the value of which we largely expect to depend on our individual and joint efforts in the community. The network ceases to function if members of the community do not utilize their token as bonding collateral to cryptographically certify transactions. The token is further utilized to cast a vote on amendments to the protocol. Only those who possess the tokens and utilize it for bonding and voting can govern.

New, High Risk Technology
3. We understand that distributed blockchain technology and governance are incipient and immature technologies, with high risk, where delays are normal, and, so far, reasonably within expectation;

Community Control
4. We, the Tezos Community, consisting of contributors, developers and future participants, are firmly guiding the Tezos Stiftung, having successfully petitioned to have one of our own Tezos Community members nominated to its Board and serve as President. We are intensely engaged and leading Tezos as an implementation of distributed governance, with a future intention of having no nexus of central control;

Class Action Without Merit
5. We are cognizant of the class actions against various parties associated with Tezos, and we denounce these actions, and we have no intention of joining as a member of the class, nor do we see that there is a sufficient class to further the case, and urge the court to dismiss the cases as without merit;

Insufficient Harm to Warrant Class Action
6. We do not feel the plaintiffs have been sufficiently harmed to warrant a class action against the program, which further delays and encumbers it by creating large legal difficulties which becomes self-fulfilling and induced by the very plaintiffs themselves who complain of delay.
We denounce the plaintiffs as having done more harm to Tezos than the delays inherent in software and network development, and we shall hold them accountable and liable for this harm when the matter comes to settlement;

Abuse of Process
7. The Tezos Community further submits that the litigation in ongoing class actions should be considered frivolous and an "Abuse of Process" by virtue of causing harm to development and governance, and effectively silencing the Tezos Stiftung and related parties, shutting down vital communication with the Community, business partners, vendors and banks. This abuse amplifies the class actions in favor of the plaintiffs and is simultaneously levered against the defendants. It mocks justice that the plaintiffs should, by standing athwart the long suffering Community, induce the case in their favor;

Tezos Token is Not a Security
8. The Community has governed-- having already appointed the President of the Tezos Stiftung and its board-- and intends to govern Tezos as a distributed entity without central control. We have no expectation or understanding of Tezos as a security, nor do we think our distributed enterprise meets the criteria of the Howey Test as a security;

Blockchain Has the Potential for Profound Societal Benefits
10. We expect the benefits of blockchain technology to be profound on society, so revolutionary that it could create a more just economy and polity and solve many of the shortcomings of the current system. The potential societal benefits are so great that it warrants the government acting with restraint and carving out a safe harbor for this new area of technology and law;

Amicus Brief
11. We authorize the Tezos Community Organizers to file this petition as an amicus brief with the court.

Sign petition with your legal name, or with the pseudonym under which you are known in the Tezos Community.


Include in "Why is this important to you:"
1. Tezos Role [Contributor, Developer, Community Member]
2. Are you a contributor to the Fundraiser in July, 2017? [Y/N]
3. Are you willing to sign and deliver this Petition by post, with your manual signature, as an affidavit, to the court? We will give you the proper form of the affidavit in PDF, in due course. [Y/N]
4. Respectful Comment Addressed to the Court.