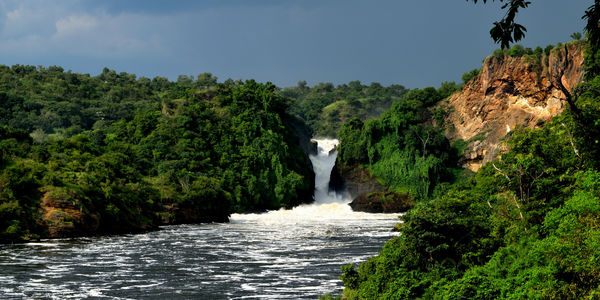 In 1962, Uganda finally gained Independence from the United Kingdom. Freedom, of course, was in the air, but it was also in the water. That same year, it rained so much that Uganda's famous Murchison Falls, became so inundated that a tributary formed and created the equally impressive and aptly named Uhuru Falls (Uhuru means Freedom in Swahili.) Both of these remarkable cascades exist inside Murchison Falls National Park, which is the nation's largest and most visited. It was once an area sprawling with wildlife. Baboons, buffaloes, and giraffes walked freely within its boundaries without fear. But over the years, despite being a national park, the area has been plundered for resources by energy and oil companies..

Now, what little wildlife is left could soon be gone. Sign the petition asking Uganda not to build a dam in Murchison Falls National Park.

Unfortunately, the government is considering allowing even more energy projects into the park. The most worrying among them is a proposed hydroelectric plant at Uhuru Falls. The project would mean more trees and habitat would be uprooted to make way for roads. This alone would be disastrous, pushing more animals out of their habitat. But the plant would destroy Freedom Falls and likely bring an end to Murchison Falls - one of the most powerful in the world.

Aside from being Uganda's most important national park, it is also considered to be one of Unesco's wetlands of international importance. Yet, that hasn't stopped the government from allowing "Big Energy" to come in and further degrade the area. For example, six oil fields will be built within the park in the coming years.

Uganda is a developing nation, and they have every right to want to provide more energy for its citizens to better their standard of living. But there are ways to do so without putting the park's wildlife and integrity at risk. Solar and biogas energy, for example, are sustainable and far less harmful to the area.

Tell Uganda not to allow any more harmful developments in the park and to let Freedom falls flow. Sign the petition and tell Uganda to say no to the proposed hydroelectric plant in Murchison Falls National Park.
Sign Petition
SHAREShare this petition with friends!TWEETEMAILEMBED
Sign Petition
See more petitions:
You have JavaScript disabled. Without it, our site might not function properly.