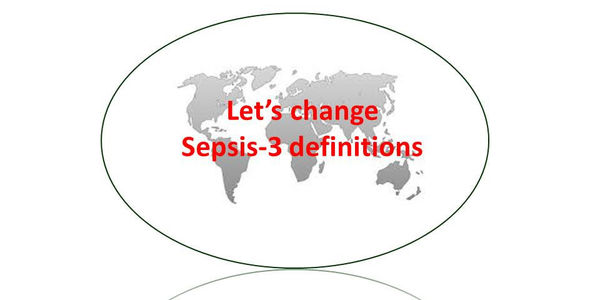 In 2017, the Global Alliance for Infections in Surgery instituted an interdisciplinary task force of 76 experts from 50 different countries with different backgrounds to assess the clinical value of the Sepsis-3 definitions. Our concerns were published in a recent review into World Journal of Emergency Surgery [1].

In February 2016, the Journal of the American Medical Association (JAMA) published a proposal for new definitions and criteria for sepsis, called Sepsis-3, updating previous sepsis definitions. The new definitions were prepared by a task force appointed by the European Society of Intensive Care Medicine (ESICM) and the Society of Critical Care Medicine (SCCM). They were aimed at providing a standardized classification to facilitate clinical care, future research, and reporting.

Sepsis is now defined as life-threatening organ dysfunction caused by a dysregulated host response to infection. Organ dysfunction can be represented by an increase in the Sequential [Sepsis-related] Organ Failure Assessment (SOFA) score of 2 points or more. Septic shock should be defined as a subset of sepsis and should be clinically identified by a vasopressor requirement to maintain a mean arterial pressure of 65 mm Hg or greater and serum lactate level greater than 2 mmol/L (>18 mg/dL) in the absence of hypovolemia.The definition of severe sepsis is now superfluous. The Sepsis-3 definitions suggest that patients with at least two of these three clinical variables may be prone for the poor outcome typical of sepsis: (1) low blood pressure (SBP ≤ 100 mmHg), (2) high respiratory rate (≥ 22 breaths per min), or (3) altered mentation (Glasgow coma scale < 15) (quick SOFA). The qSOFA score should not be regarded as a diagnostic criterion for defining sepsis. Rather, it should be regarded as a warning for patients with suspected infection who are likely to have poor outcomes.

However, some concerns about the new definition of sepsis have been reported. Since the first classification in 1991, the definitions of sepsis, severe sepsis, and septic shock, though imprecise, have provided to clinicians a useful framework for clinical management, stressing the need for early recognitionand when these criteria are followed by the application of the Surviving Sepsis Campaign recommendations, they have an impressive history of success in reducing the mortality of sepsis in several areas of the world. To enable early interventions being effective, the diagnosis of sepsis must be made as early as possible and treatment must be started early. The ability to identify septic patients who are at high risk for subsequent organ dysfunction and mortality, starting from emergency department, is crucial since timely recognition and appropriate, effective treatment substantially improves survival.

The new definition of sepsis requiring the presence of organ failure has lost its predictive potential and may hinder the awareness of the importance of early recognition and treatment of sepsis, de-emphasizing intervention at earlier stages when it is most treatable and leading to a higher risk of delayed diagnosis.  Ideally, patients at risk for sepsis should be identified before organ dysfunction is established. Therefore, it may be questionable if it is helpful to have a definition that recognizes a patient once organ dysfunction has occurred and the patient already needs intensive care.

The Sepsis-3 definitions recommend using an increase in the SOFA score of 2 or more points to represent organ dysfunction. The SOFA score is intended to be used in the ICU and, to a lesser extent, the emergency department. Outside the ICU, SOFA was found only as good as the previous SIRS criteria. Moreover, it is a valuable predictor of unfavorable outcome. The use of the SOFA score in research is commonly performed and constitutes a routine component of data collection for clinical trials in ICUs. However, the SOFA score is not universally accessible. Recognizing these practical limitations, the task force described a simplified method termed the "quick SOFA" (qSOFA) score to facilitate easier identification of patients potentially at risk of dying outside of critical care settings.

An important limitation of the new definitions is the poor sensitivity of the qSOFA scoring system. This leads to a high number of false negatives and, subsequently, to a delayed diagnosis in many patients, which likely excludes its use as a screening tool for early sepsis, the stage in which treatment is most effective. Sepsis requires urgent recognition because delayed treatment increases mortality. To optimize the timing of therapy, a screening test should be as sensitive as possible. Thus, it is preferable to have a more sensitive test with lower false negative results in order to not miss cases of serious sepsis. Clinicians should keep in mind the difference between a screening tool and a risk-stratification tool. A screening tool aims to identify patients with a particular disease from a larger pool of patients. Once these patients are identified, a risk-stratification tool can be applied to determine their likelihood of meeting a particular outcome. We probably still need a good screening tool to identify patients at risk of developing organ dysfunction. However, this is not addressed in Sepsis-3.

Although some patients with ongoing sepsis may not have elevated lactate levels at presentation or during their clinical course, lactate measurement is advised as an important component of the initial evaluation of patients with sepsis. Elevated lactate levels (even if > 4 mmol/l) are no longer part of organ dysfunction criteria to define organ failure. In the new definition of septic shock, hyperlactatemia is a required component for septic shock, differently from Sepsis-1 and Sepsis-2 definitions in which just the presence of refractory hypotension to fluid loading was considered shock. Therefore, when lactate measurements are not available, the diagnosis of septic shock can be more challenging and patients with potential shock will be considered as having only sepsis.

The new definitions are based on a retrospective evaluation of large hospital databases from two countries (the USA and Germany). The majority of sources of infection were hospital patients in referral centers with respiratory and postoperative infections. The target reader is an intensive care unit (ICU) physician. Although these definitions are of help for research purposes, they may not be representative of the wider clinical community. Major international differences exist in the prevalence of infections, types of infecting microorganisms, and mortality rates. EPIC II demonstrated significant differences in Eastern Europe as compared to Western Europe, in Australasia as compared to Asia, and in Latin America as compared to North America. Sepsis is a burden for global health. Its global nature calls for a global response, both in the geographic sense and across the whole range of sectors involved.

We have raised our concerns regarding the Sepsis-3 definitions. We believe that in order for sepsis definitions to be universally accepted, they should facilitate clinical care on a global scale.

On Friday, May 26th, 2017, the World Health Assembly and the World Health Organization made sepsis a global health priority, by adopting a resolution to improve, prevent, diagnose, and manage sepsis. The Global Alliance for Infections in Surgery suggests that future revisions have a more global perspective and include a wider range of representatives and expertise. We also hope our petition can serve as a basis for future discussions on how to further improve the definitions of the sepsis continuum.

Global Alliance for Infections in Surgery