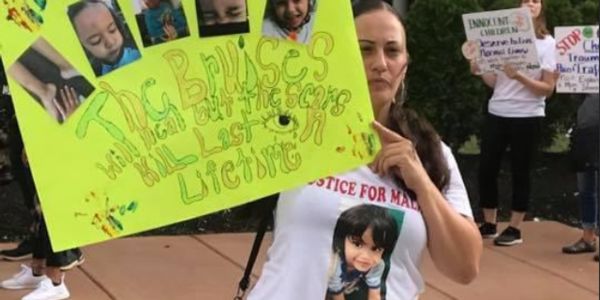 Demand Child abuse Registry “We are their Voice

REFORm Is MUCH NEEDED!            CHILDABUSERS, familycourt & CPS NEED to be EXPOSED & held Accountable.
Forcibly, every weekend my child continues to endure abuse at the hands of his father. He returns  home with extensive bruising on his body. Theres police reports, CPS and Doctor's records indicating abuse.

Family court and the Law guardian are well aware of ALL indicated reports as well as concerning recorded phone conversations with inconsistencies, when asked about the extent of the bruising.

On MANY occasions my lawyer and I have approached the courts with these concerns. During this time dad still has been given more access , as I feel that I'm being retaliated against. Although, the law guardian has had frequent contact with CPS and their concerns he refuses to look out for the well-being of MY child.
My situation amongst Many others has become Extremely emotional & disheartening.

It is Very appalling the court knowingly continues to Subject & victimize my child to endure physical, verbal, and mental abuse.

Due to my child's drastic change in behavior, which include night terrors, urinating on himself, physical and violent outburst, I've had to place my child in counseling and reached out to all available agencies exhausting all resources to protect my child.

My child's rights to be protected & my rights as a mom to keep him safe are clearly violated. It is Evident this man has gained more control and continues to harass me through the courts feeling as there are no consequences, due to the inadequate handling of this case.

In conclusion, I would like to see a Abuser registry formed.Repeated abusers Must Register & public Should have free access.  The family Courts should follow proper Guidelines  to  be enforced while strictly monitored along with a certificate of completion. Programs include ; Drug and alcohol , Mental health  and Parenting classes . Family court JUDGE & Lawguardian NEED to be fully educated on manipulation tactics, Domestic Violence and Abuse.  CPS need to  Adjust their standard of abuse and Pay close attention to repeaditive persons & actions; Docters, police , recordings, pictures.

All of the above need to be put into consideration To protect Our children.

Care2
Demand Child abuse Registry “We are their Voice
SHARETWEET