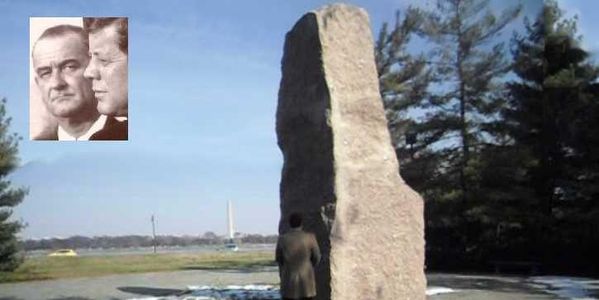 Lyndon Baynes Johnson does not deserve a memorial financed by the American public.  He is a primary suspect in the murder of John F. Kennedy, to become President.  He did not do anything particularly noteworthy while in office.  His "public service" was marked by charges of bribery and corruption.

LBJ was basically a 1 term president, with low popularlity in the polls, due to his Viet Nam War, and dropped out of the race for a second term in 1968, against Richard Nixon.

LBJ's personal life was no model for others to follow.  He cheated on Lady Bird and fathered 3 children outside marriage, including son Steve with mistress Madeleine Brown.

LBJ did nothing above following orders or heroic in WWII, unlike JFK.  JFK was bringing the troops home from Viet Nam.  Soon after November 22, 1963, LBJ accelerated the war, resultng in over 50000 American troops being killed, plus many thousands of innocent civilians.  We ask that this memorial be removed from public lands, and that the spot be reserved for a truly heroic American patriot.

LBJ was the first and only one to duck before the first rifle shot at JFK.

LBJ has been named by his attorney Barr McClellan, and by CIA agent E. Howard Hunt, as the man who was a key organizer of the assassination of President John F. Kennedy.

As LBJ often had others removed in his quest for power, we, the citizens request the removal of his memorial from public lands, and from taxpayer funding.