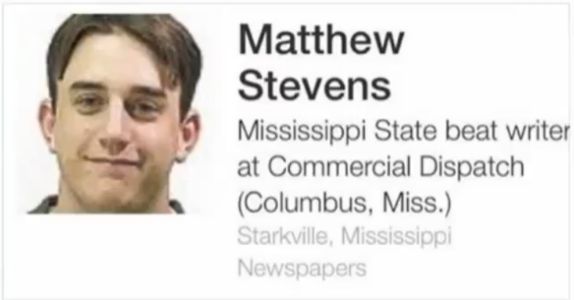 Give Matthew Stevens His Job Back

By now most of us have heard the disparaging comments made by Matthew Stevens about his trip to Lafayette, La. while covering the NCAA regional at M.L. "Tigue" Moore Field for the Commercial Dispatch in Columbus, Miss.

Mr. Stevens' comments on an internet radio station were uncalled for; he insulted a culture, a city, and an entire state. The negative response he received from south Louisiana regarding those comments was well deserved.

However, Mr. Stevens showed great maturity on his part when he publicly apologized--both on his internet radio show as well as in the Lafayette media--for his actions and asked for forgiveness. While speaking with Jay Walker on ESPN 1420, he sounded appropriately remorseful; Jay accepted that apology, and we do as well.

Unfortunately, Mr. Stevens' employer at the Commercial Dispatch has seen fit to fire him.

Matthew is only 29-years-old. Who among us--especially those of us with a little growing up still left to do--has not made a mistake we truly regretted? Mr. Stevens deserved to be called out for his comments, but time and time again, we in south Louisiana have proven that we are willing to forgive.

Matthew, we forgive you. As to the management team at the Commercial Dispatch, give him back his job. The backlash he received and the remorse he feels should be punishment enough.

Care2
Give Matthew Stevens His Job Back
SHARETWEET