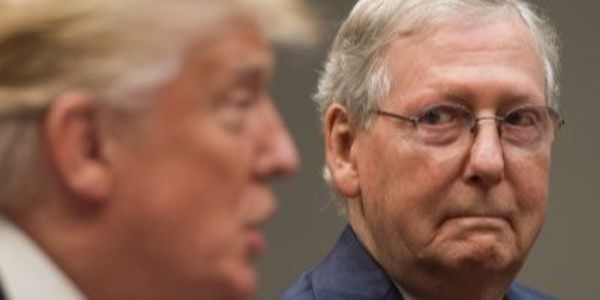 As the Trump shutdown drags on, Democrats have been successful in staving off Republican demands to fund the wholly unpopular border wall. While Senate Majority Leader Mitch McConnell (R-KY) has ceded his power to the executive branch and refused to schedule a vote for any bill that doesn't include funding for the wall, Democrats are fighting back with every tool they have at their disposal.

Democratic Senators Chris Van Hollen and Ben Cardin of Maryland introduced the idea to block all bills while the government is closed. If Mitch McConnell wants to remain complicit in holding government employees hostage, he will have to reconcile the fact that zero Senate business will be done. He's made his bed; now it's time to lie in it.

Until Mitch McConnell decides to retake his Constitutional authority to legislate, he will have to shoulder the responsibility for the complete stoppage of the United States Senate.

To be clear, McConnell could unilaterally choose to reopen the government if he wanted. Legislation to open the government already passed the United States Senate overwhelmingly once; it was only House Republicans that stopped its progress when Trump signaled he'd changed his mind about border wall funding being a necessity. But with a Democratically-controlled House, the reopening of the government would be all but certain if the legislation was to be reintroduced. Even if Trump did veto the legislation, Congress could override his veto with a 2/3 majority. Considering it passed the Senate unanimously once, securing this majority would be an easy feat.

Therefore, since Republicans have allowed Trump to hijack not only his party but a separate branch of government, no part of his agenda will proceed until either the president ends his temper tantrum or McConnell decides to end it for him.

We, the undersigned, urge Senate Democrats to continue to block all Senate business until McConnell and Trump reopen the government. If they couldn't get a border wall when Republicans controlled every branch of government, they certainly won't get one now — and no amount of foot stomping will change that.