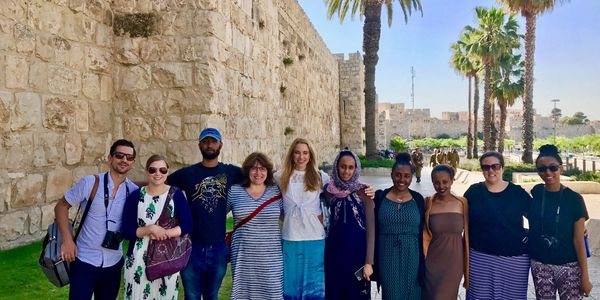 Professor Melissa Landa was dismissed from her teaching position at the University of Maryland (UMD) after she became a vocal pro-Israel advocate who actively challenged the BDS campaign in academia.

Detailed information is available at the Supporters of Melissa Landa website.

The University of Maryland needs to be held accountable for the injustice it has inflicted.

For ten years, Dr. Melissa Landa was an Assistant Clinical Professor in the College of Education. She won awards for her teaching and research and created some of the most popular courses in the College. Students described her as "one of the best professors at this institution," and colleagues praised her as an "honest, fair, and collaborative professional."

In Spring 2016, Melissa appeared in the national press for her leadership in confronting anti-Semitism and BDS at Oberlin College, her alma mater. She joined the Academic Engagement Network, a faculty organization that opposes BDS; she became an affiliate professor at Haifa University; and she planned to begin a research partnership with a college in Tel Aviv. Weeks later, Melissa began to face discriminatory treatment and a hostile work environment from the Chair and Associate Chair of the Department of Teaching and Learning, Policy and Leadership – Francine Hultgren and John O'Flahavan. They:

• Criticized Melissa for her efforts to confront anti-Semitism;
• Withdrew from a conference presentation with Melissa, who was discussing her research in Israel;
• Reprimanded Melissa on the first night of Passover when she was observing the holiday in Israel;
• Threatened to fire her for being "out of bounds of acceptability with regard to campus policy" for missing classes during Passover;
• Reassigned Melissa from a literacy course she had helped to create and taught for over ten years, preventing her from pursuing a partnership with her Israeli colleagues.
• Removed Melissa from the Elementary Education Program, stripping her of her central role in the College of Education.

Melissa filed a Faculty Grievance against Dr. Hultgren and Dr. O'Flahavan, and on June 5, the Grievance Board reported

"In the interest of the program, the Hearing Board hopes that a professional path for Dr. Landa can be found that harmonizes her teaching and scholarly interests with the needs of the Department…"

Three days later, Francine Hultgren emailed Melissa in Israel and informed her that her contract was not being renewed. Melissa was the only Clinical Professor to be terminated.

We are deeply disturbed by Dr. O'Flahavan's and Dr. Hultgren's discriminatory and retaliatory conduct, and by Dean Jennifer Rice's defense of their actions. They have destroyed Melissa Landa's academic career and disgraced the University of Maryland.

After you sign this petition, please consider calling or writing to:

Office of the Board of Regents University System of Maryland