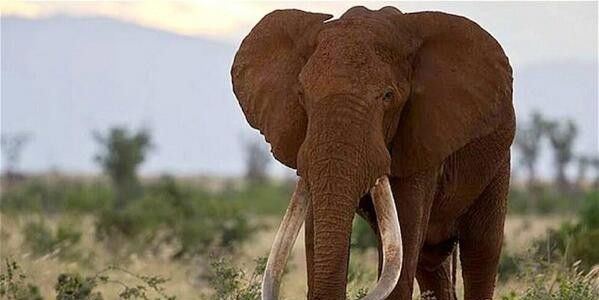 The largest ‘great tusker’ elephant in Kenya was killed by poachers in late May. Pictured with this petition is Satao, killed only weeks ago in Kenya by poachers for the ivory trade.

The death of Satao, one Kenya's few surviving elephants whose tusks weigh over 100lbs, has sent shockwaves around the world.

As a consequence, conservationists are asking the Kenyan President, Uhuru Kenyatta, to provide armed protection for the country's remaining ‘great tuskers.’ While it may not be possible to guard these elephants around the clock, armed guards, provided by the Kenya Wildlife Service, would serve to deter poachers from hunting down the remaining giants for their tusks.

There is precedent for this request: Mr Kenyatta's own father, Jomo, who led Kenya from 1963 to 1978, placed an elephant with massive ivory, named Ahmed, under his protection by presidential decree in 1970.

Tragically, few of the 'great tuskers' remain in Kenya -- their numbers may now be fewer than a dozen. The Kenyan president needs to act now before another 'great tusker' is lost. Please sign the petition to ask President Uhuru Kenyatta to give armed protection to the last great tusker elephants.

Your Excellency,
We are shocked and deeply saddened to hear that one of the world's last big tuskers, Satao (pictured above), has been killed by poachers. Not far from him are older carcasses of others killed earlier. This comes too soon after another iconic elephant,Mountain Bull, was also dispatched for his ivory.

Since setting up this petition we hear reports (tbc) that another 3 bulls were apparently killed in Tsavo in late June.
Poaching is now out of control - it is both a national and international crisis.

Only around a dozen of these rare tuskers remain in Kenya. This small gene pool needs to be preserved. Kenya is proud to be home to the last of these tuskers. It is a heritage to be protected for future generations.

Please protect Kenya's tuskers with armed guards.
The KWS, community and conservancy ranger forces are doing their utmost to protect Kenya's wildlife against well-armed poachers and criminal cartels that support them. Rangers risk their lives every day. They need more support and to be in sufficient numbers and be equipped to effectively combat the present intensity of attack by ever better armed and brazen poachers.
We ask that known traffickers of ivory, rhino horn and other illegal wildlife parts be arrested without delay and tried for their crimes against wildlife.

Presently courts have not been/or been able to enforce the law.
Kenya is now one of the three main hubs through which the continent's illegal ivory is leaving Africa. Mombasa is the world’s busiest port for ivory transit[1].
Your late Father, the former President, His Excellency Jomo Kenyatta, wisely placed Ahmed, the splendid bull of Marsabit under his protection by presidential decree in 1970.
We respectfully ask you to do the same for the last few rare and magnificent tuskers. Please do everything in your power to preserve them. It would be an irreversible tragedy for Kenya and the world if we lost them.