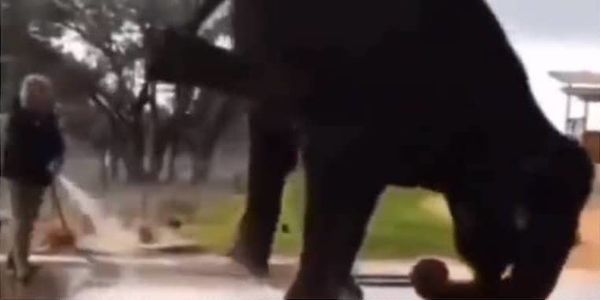 Elephants are smart, social, soulful creatures. But there are some things they just should not do. For example: unnatural, unhealthy tricks like headstands.

In a recent video posted to Twitter that's since gone viral, someone is filming as a handler washes a captive elephant. The animal leans forward onto its trunk and head, moving into a headstand while a man sprays the creature down with water.

The people who posted the Twitter video may have been impressed with the stunt. But luckily most animal lovers on the internet know better - and they're outraged.

We must prevent future abuses and speak up for captive elephants!

While an elephant standing on its head might seem amusing at first glance, it's an unnatural behavior that these majestic beings do not display in the wild. That means they've been forcibly taught to perform these unusual tasks. And the way handlers train elephants is anything but humane. Instead, they employ vicious, horrific tactics like stabbing the animals with bull hooks, or shocking them with cattle prods.

As one person on Twitter commented in response to the video: "Elephants can do lots of things once they have been shocked, beaten, starved, chained and suffered all manner of unspeakable torture." Another Twitter user wrote, the stunt was "not by choice - this is not a neat trick the elephant does just because. It's the result of a wild animal held in captivity and abused for human entertainment."

Elephants should never be coerced and abused into performing for humans in this way - not in circuses, not in zoos, and not in anywhere else.

The video has since been removed from Twitter, but it was online long enough for it to amass more than 300,000 views. And when a video like this goes viral, it means more and more people could be lulled into believing such cruel exploitation is normal.

Twitter must implement a stronger system to catch these videos before they go viral! Sign the petition if you agree!