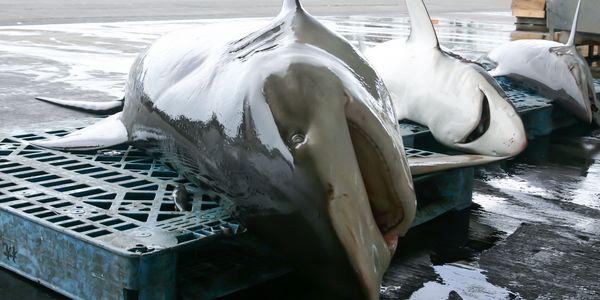 Sharks Need Our Protection. But This Tournament Rewards People for Hunting Them Down.

Fishermen in Florida have set up a shark fishing tournament - and they're claiming this tournament is somehow actually for research. That seems unlikely since the whole event is aimed at making money and convincing the general public that there are supposedly "too many" sharks around (a claim that experts have proven is false).

Anyone wanting to be involved in the shark-fishing event must have a boat or join a team on a boat, and pay $100 per vessel. Flyers advertising the event promise participants that they could receive cash prize rewards if they successfully catch one of the heaviest sharks.

How is this about research, exactly?

Sign the petition to demand Florida authorities shut down this event now and in the future, because it will hurt vulnerable shark populations!

Technically, under current Florida law, each person is only allowed to catch one shark, and each boat is only allowed to catch two (even if there are many people on a boat). But it seems unlikely that tournament participants will want to stick to those rules - seeing as they have every incentive to break the rules. After all, there's money at stake for them!

Fishermen organized the event because they believe they're seeing more sharks in the water, and they think this is interfering with their fishing efforts. But sharks are supposed to eat fish. That's what they do. And we don't have the right to massacre a whole species just because some fishermen got annoyed with them!

As Raven Lynette, a diver and shark campaigner, has said: "This is mainly a money-making scheme, similar to 'legal' trophy hunts in Africa. The people who pay for these permits are mainly fishermen that are uneducated on the importance of sharks or simply think that the sharks are the enemy competing with their catch. They are not interested in 'research.'"

Even worse, she makes clear that: "No observer is required for these tournaments, making it easy for fishermen to kill and sink protected species. Also, there is ZERO reason to kill sharks, regardless of their protected (or not) status. As a whole, they are rapidly declining."

Shark researchers, environmentalists, and local divers have all testified that this shark-fishing event would be bad for the local shark population. And since sharks are incredibly important for the overall ecosystem, it could throw everything out of balance. These apex predators help preserve a healthy food web structure. Without them, Florida's waters - and the rest of the ocean beyond! - could see horrifically damaging consequences.

We need sharks. And sharks need our help. The ocean is their home! We have no right to go on mass murder missions, just because sharks also eat fish and swim where we want to go boating. That's no reason to hurt these crucial living beings. Even worse, their populations have been dwindling for decades - we need to protect them now more than ever.

Florida authorities should never have allowed this tournament to begin with. Demand they shut this operation down, and never allow it to happen again in the future! Sign the petition to help the sharks!
Sign Petition
SHAREShare With FriendsTWEETEMAILEMBED
Sign Petition
See more petitions:
You have JavaScript disabled. Without it, our site might not function properly.

Care2
Sharks Need Our Protection. But This Tournament Rewards People for Hunting Them Down.
SHARETWEET