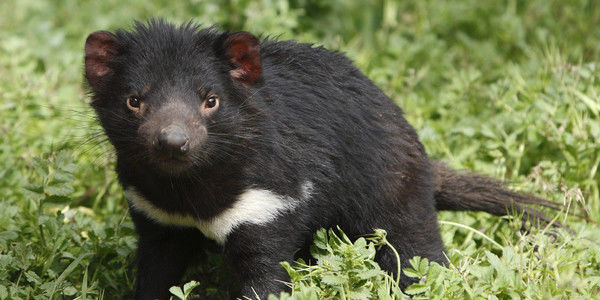 For years, Tasmanian devils were going extinct. Now they could make a return.

For 3,000 years, the iconic Tasmanian devil has been functionally extinct in mainland Australia. That is — until now.

In late May 2021, a mama Tasmanian devil made history by giving birth to a new group of seven babies (called "joeys") at the Barrington Wildlife Sanctuary in New South Wales, Australia. With the birth of these joeys as well as additional efforts from last year to reintroduce Tasmanian devils into the Australian wild, the population is now up to 26 animals. This is a huge advancement, but there's still so much work to be done!

Thousands of years ago, Tasmanian devils were once extremely populous in Australia, but their species suffered a huge decline — much of it just within the past few decades. Wild dogs called dingoes hunted and tore up the marsupials, decimating their communities.

Luckily, these animals have still managed to survive on the island of Tasmania (off the coast of mainland Australia), where around 25,000 individuals are left. That meant experts were able to use this community of devils to help repopulate the rest of Australia. But even here, they've still been in danger. A peculiar form of contagious facial cancer began spreading amongst the devils. It only took it 25 years for this disease to kill off 90% of the species.

Tasmanian devils are a hugely important species of wildlife that plays a crucial role in keeping the larger Australian ecosystem healthy. Being scavengers, they're like land-bound vultures that help keep other animal populations safe by cleaning up diseased, already-dead creatures — which prevents infections from spreading and overtaking whole species of other wild creatures.

Tell the Australian government to support the Barrington Wildlife Sanctuary's work of reintroducing Tasmanian devils to the mainland! These important animals must not be allowed to die off again.
Sign Petition
SHAREShare this petition with friends!TWEETEMAILEMBED
Sign Petition
See more petitions:
You have JavaScript disabled. Without it, our site might not function properly.

Care2
For years, Tasmanian devils were going extinct. Now they could make a return.
SHARETWEET