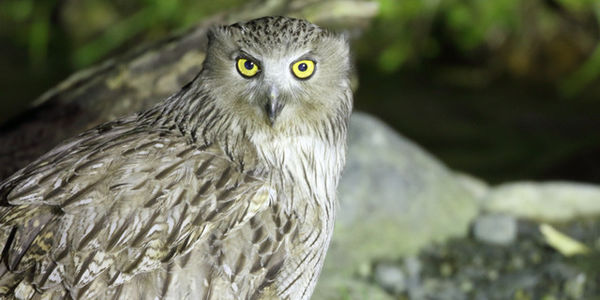 The largest owls in the entire world are one step away from extinction. Living in Russia and Japan, fewer than 1,900 individual Blakiston's fish owls are left alive in the world — and only around 400 are living completely wild, without human assistance.

These sweet animals match up in pairs for their entire lives, and they call back-and-forth to their mates in beautiful "duets" that last for hours on end. These creatures are an awesome sight to behold as well as hear: adult Blakison's fish owls have a wingspan around six feet wide (the height of many adult humans!) and a torso the size of a fire hydrant.

But climate change and habitat loss due to logging have been ravaging this species. And now, the remaining 1,000 or so could truly be the last of their kind.

Sign the petition to demand that the governments of Russia and Japan step in to protect the Blakiston fish owls' habitat now!

These northern-residing owls love to hunt for fish and frogs in icy rivers which are being massively disrupted by our warming climate. As more ice melts and spring arrives earlier and earlier, the mating and migration patterns of these life-sustaining fish and frogs are changing, too. And that has caused tragedy and heartbreak as little fluffy baby owls and their mated parents starve to death, searching for food that never seems to arrive.

On top of that, these owls increasingly have nowhere to live. Their main homes are inside dead trees, within old-growth forests. But old-growth forests are a prime chopping spot for logging companies, eager to gobble up as much timber for profit as possible. With all the chopping has also come the felling of trees to construct miles and miles of logging roads, so that trucks can haul timber back out of the woods.

That's why experts are begging for government officials to take action to curb logging in old-growth forests now! If restrictions aren't put in place, the Blakiston's fish owls will be the world's largest owls no more.

Tell authorities in Russia and Japan to save the critically-endangered Blakiston's fish owls — the world's largest owls — before it's too late!
Sign Petition
SHAREShare With FriendsTWEETEMAILEMBED
Sign Petition
See more petitions:
You have JavaScript disabled. Without it, our site might not function properly.