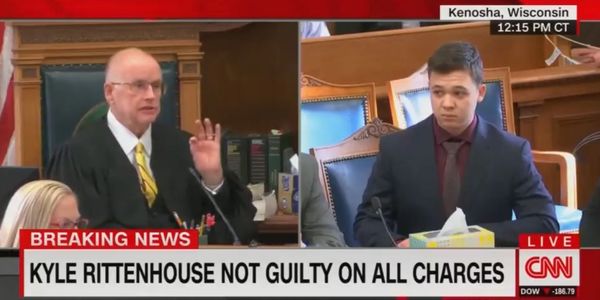 Kyle Rittenhouse Was Acquitted in a Completely Unfair and Biased Trial. Remove Judge Schroeder from His Seat!

Kyle Rittenhouse has been found 'not guilty' of murdering protesters in Kenosha, Wisconsin. The man who admitted to taking two lives on the night of August 25, 2020 will walk free, and thus undoubtedly become a mascot for violent white supremacist vigilantes across the United States. Throughout his entire sham of a trial, Rittenhouse was aided, shielded, and comforted by Judge Bruce Schroeder, who has proven beyond a shadow of a doubt to be completely unfit for the office of judge.

He cannot use his bias and impartiality for another miscarriage of justice like this. Demand that the Wisconsin State Legislature immediately remove him from his seat!

Joseph Rosenbaum and Anthony Huber, Rittenhouse's victims, were out on the streets of Kenosha the night they were killed because they were demanding justice for Jacob Blake, a Black man who was shot two days earlier by police as he was walking away from them. But these two victims will never see their own justice because of Judge Schroeder's horrific judicial misconduct.

In fact, as part of the trial, Schroeder wouldn't even allow prosecutors or people providing testimony to reference Joseph and Anthony as "victims."

He also allowed video of police praising Rittenhouse but wouldn't allow video of Rittenhouse saying he wanted to shoot looters. He also wouldn't allow photos of Rittenhouse with the Proud Boys, a known white supremacist group. The judge even allowed him to stay out of jail when he briefly disappeared while out on bail. During jury selection, a juror said his strong feelings in support of the second ammendment would not allow him to be impartial and Judge Schroeder said he didn't care and allowed him to stay. At one point, the judge's phone rang and the ring tone was the song Donald Trump uses at his rallies. He also dropped some of the charges against Rittenhouse. Ultimately the jury was all white with a judge who didn't even try to pretend to be impartial.

Judge Schroeder has made an egregious show of his personal, biased values throughout this entire trial. From asking that everyone applaud a witness for the defense, to making anti-Asian jokes in reference to food delivery, he has proven that he would rather coddle a white supremacist than find true justice. That is not a judge that deserves to be on the bench of any U.S. court.

If he was willing to so blatantly favor the defendant in this case -- Rittenhouse -- then what does that mean for the other cases he oversees? How many white supremacists with guns and murderous tendencies will he protect?

Join us in asking that Judge Schroeder be removed from his seat as a Wisconsin Judge! Sign the petition today.

Care2
Kyle Rittenhouse Was Acquitted in a Completely Unfair and Biased Trial. Remove Judge Schroeder from His Seat!
SHARETWEET