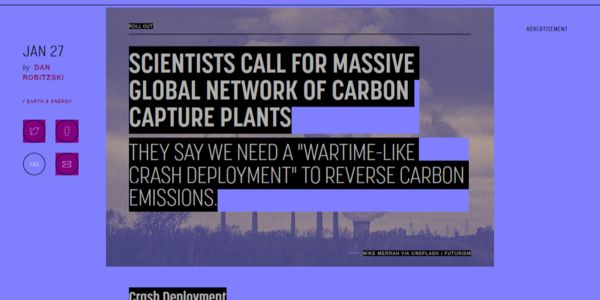 Global warming is real and despite the naysayers, is happening and is  only getting worse.
The United States, can be the leader in further developing the various forms of what's called," Carbon Capture Technologies", to greatly help capture the carbon dioxide already in atmosphere from pollution, thereby also creating millions of what should be good paying jobs, help displaced workers and the unemployed and should be implemented across the nation that's if all our political leaders have what's in the best interests of the people or children of today and thereby tomorrow at heart, instead of often times, selfish petty moneyed interests

The Biden Administration, must see to it that carbon capture technologies are explored and implemented along with planting  many more trees, these alone, will be vitally necessary to mitigate the effects of climate change and avert some of the more dire, truly scientific based conclusions, on what's happening and how it will take implementing major methods if we are to have a viable planet for ourselves or our children and their children, for if we as a people, fail to act, I hate to be a doomsayer, but it will be all over for the planet and ourselves in maintaining a livable world

Please call, email or write your congressman and senators democrat and republican alike,, remind them of the importance and reality of climate change, how it will further impact our daily lives via especially food prices, crops and water scarcity and this is no joke, all you have to do really, is to have been following weather events from around the world to see, this dire threat is staring us right in the face and it will only  be getting worse and especialy, if our political leaders fail to take major decisive actions, remind them as well, the following.....
Biden Administration has said, millions of jobs can be created for people and yes, of course the big oil companies, if they divest and invest instead, in  alternative green energy,such as hydrogen and fuel cell technologies along with battery technologies, for it does not have to be an all or else sum game, everyone can all come out  as winners, all the workers of America  and way  up to the CEO's of this world. All we have to do is help our political leaders see the light, get with program or vote them out of office, one or the other is necessary, for all they have to start with is care about it and do something!