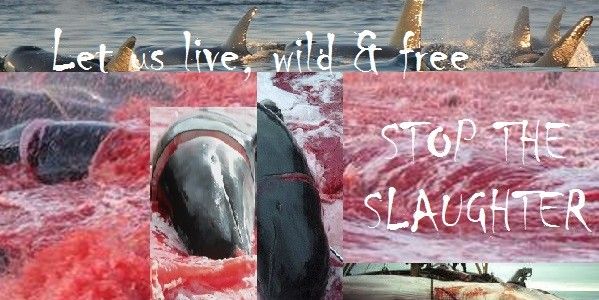 ....... The sea churns red with blood from the majestic giants as they thrash wildly, panicking and in pain while desperately fighting to escape. Their screams are said to linger hauntingly as their fate is sealed. No more will they swim free, sharing with us their pure joy at life......

Norway has killed more whales in the past two years than Japan and Iceland combined! This gives them the unsavoury title of "world's leading whaling nation".

"As one of the world's most modern and prosperous countries, Norway's whaling is an anachronism," said Dr. Sandra Altherr, biologist with ProWildlife. "Slaughtering whales to eat and trade has no place in Norway and serves only to diminish the country's international reputation."

The Norwegian government funds a number of projects, which promote domestic sales of whale products and also to develop alternative commercial products derived from whales, including dietary supplements, medicines, and cosmetics. A series of new health and beauty products, including skin cream derived from whale oil was launched in 2015 by the company Myklebust Hvalprodukter.

"While diplomatic pressure has been brought to bear on Iceland and international legal action has been taken against Japan for their whaling programs, Norway has largely been spared international attention and criticism." Norway continues to let Iceland and Japan take the heat for whaling.

Norway has aggressively fought to retain its right to hunt whales despite it being unnecessary, uneconomical and unquestionably cruel.

Whaling equipment has evolved from the hand thrown harpoon of yesteryear (although more primitive tools are still used in some waters). In the 1980s Norway began a big push toward improving the humaneness of whaling.
Naturalist Sir David Attenborough said in a report that "there is no humane way to kill a creature as large as a whale, especially at sea".

"The whales are pursued relentlessly to the point of exhaustion before they are harpooned. The Norwegian whalers in particular make use of highly explosive penthrite-tipped harpoons that shoot out of cannons some 50 to 60 millimetres (2 inches) in diameter. As the harpoon enters the whale, two hooks at the back of the grenade catch on the whale's skin and a nylon cord extending from them pulls the grenade pin when it gets to an ideal depth inside the whale's body for detonation. Exploding harpoons are often not fatal and wounded, harpooned whales are dragged to whaling vessels, where they may be speared with more harpoons or shot with high-powered rifles. Whales which are harpooned near the tail and then winched in alive to the bow of the catcher ship eventually die of suffocation as their heads are forced underwater.
Because whales are able to slow their breathing and heart rate, many that appear dead or unconscious are probably still feeling extreme pain."

According to some volunteers from the Sea Shepherd Conservation Society, members saw a whale harpooned in 2009, they say it took 25 excruciating minutes for the animal to die (it can take much longer when managed poorly).

Tragically, Norway is using whale meat to feed animals that are raised for fur.
Read more at https://thinkprogress.org/norway-is-killing-whales-to-feed-animals-raised-for-fur-70c96a6f13cd#.r2m45homz

The Environmental Investigation Agency (EIA) and the Animal Welfare Institute (AWI) found that whale meat caught in 2014 was reportedly used for animal feed for the Norwegian fur industry.

A growing whale watching industry is a profitable venture that Norway could use to their advantage.

"Whaling is an unnecessary industry which adds pressure to species that are recuperating from centuries of horrific abuse."

The whaling industry is bad enough on its own, combined with links to the fur industry it is nothing short of evil.

Please support this petition by signing and sharing.