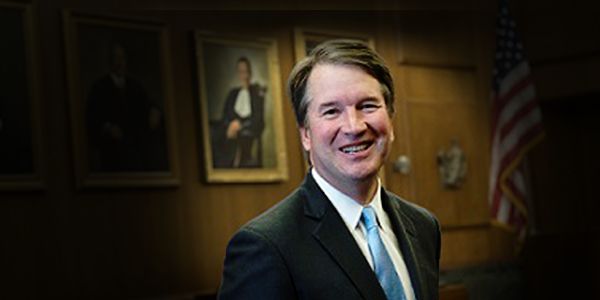 Brett Kavanaugh is a Sexual Predator and a Biased, Unstable Liar. He Doesn't Belong on the Supreme Court. Impeach Him Now!

Last month, with survivors all over the country watching closely, the U.S. Senate voted to elevate Brett Kavanaugh, a known sexual predator, to become a Supreme Court justice. It was a terrible blow. After weeks of victims sharing their stories — many for the first time — as well as protests, calls to Senate offices, and begging them to do the right thing, our elected officials turned their backs on us. They decided that, rather than stand with women and survivors, they'd prefer to glorify and applaud a sexual criminal.

And I know — I KNOW — how disheartening this can feel. Like many others, I am a survivor. The knowledge that someone like my perpetrator is now sitting on the Supreme Court, of all places, is nauseating and horrifying. Like many others, I was out there protesting, calling senators, making my voice heard. I know that it can feel like utter defeat; like the Patriarchy striking yet another blow against women, femmes, and survivors. It can be tempting to just resign and curl up in a ball, feeling that we "failed."

But we didn't fail. And, as tough as it is to think about getting back out there, we HAVE to. Because this fight is not over, and we will NOT let Brett Kavanaugh continue to smugly sneer at us.

Let's first remember how much we accomplished. We raised awareness, shared our stories, and exposed this misogynistic sexual predator and liar for what he is. We reminded each other that we're all here and in this together. We forged connections. We reminded each other that we're strong and not broken, and that we WILL speak out. We are amazing. And there is still more we can do.

Amazingly enough, the Constitution was actually prepared for just such a moment, and it states that we could still stop Kavanaugh, even now. In Article II, Section 4, the Constitution states that all civil officers — which includes Supreme Court Justices — can be impeached and even convicted on the basis of "Treason, Bribery, or other high Crimes and Misdemeanors."

Kavanaugh stands accused of committing perjury before the Senate on multiple occasions, as well as sexually assaulting or attempting the rape of at least three different women. These are all serious crimes, and reasonable grounds for his removal.

If Democrats were to retake the U.S. House of Representatives during the Midterm elections, we'd have a real chance to take down Kavanaugh and show perpetrators and their protectors that we will NOT be silenced or pushed into submission. Those days are over!

Women and survivors are rising. We will not stand by and continue to be forced into shame and hiding. We have cracked open the door and we're not going to let it close again.

We can't lose hope. There is still more we can do. Sign the petition to demand the House of Representatives investigate and impeach this dishonest, unstable sexual predator from the highest court in the land!

Care2
Brett Kavanaugh is a Sexual Predator and a Biased, Unstable Liar. He Doesn't Belong on the Supreme Court. Impeach Him Now!
SHARETWEET