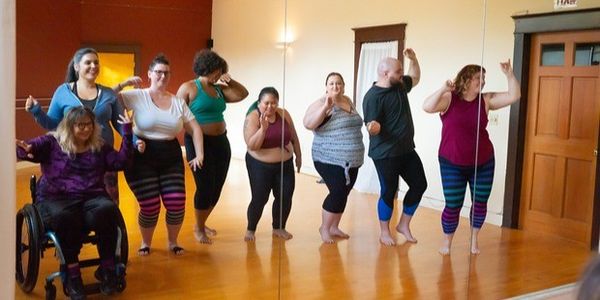 UPDATED - Obesity is not a diease. Weight loss surgery is not the cure.

How Fatphobia is Masked by the Medicalization of Obesity

Historically, medicine considered homosexuality a disease - something to be cured.

"In 1899, a German psychiatrist ...kicked off a phenomenon that would later be known as the conversion therapy….designed to quash LGBTQ people's sexuality and make them conform to society's expectations of how they should behave….

Though it's dismissed by the medical establishment today, conversion therapy was widely practiced throughout the 20th century, leaving shame, pain and self-hatred in its wake. Some LGBTQ people were given electrovonvulsive therapy, but others were subjected to more extreme techniques…(1)".

While physicians believed that they were curing a "disease", the impact on the LGBTQIA+ community led to more trauma and stigmatization.

"The American Psychiatric Association (APA) removed homosexuality from the Diagnostic and Statistical Manual of Mental Disorders (DSM) in 1973 after social protest movements (starting with the African-American civil rights movement and then evolving on to the women's and gay rights movements) (2)".

In the case of "o**sity management", there is enough evidence for us to pause and question whether stigmatizing treatment, rather than BMI itself, leads to poorer health outcomes for higher BMI patients. Studies yield mixed results giving way to the "o**sity paradox".

The guidelines by Obesity Canada (OC) state that:

"WW (Weight Watchers), Optifast, Jenny Craig and Nutrisystem should achieve mild to moderate weight loss in the short or medium term (3). OC also states that caloric restriction can achieve short-term weight reductions in weight (ie. less than 12 months) but that has not been shown to be sustainable long-term (more than 12 months). Caloric restriction may affect neurobiological pathways controlling appetite, hunger, cravings and body weight regulation that may result in increased food intake and weight gain." (Jacinthe - I put the last sentence first. The last two sentences are one after another in the OC publication)

One study looked at all-cause mortality and BMI in more than 1 million Koreans. After adjusting for age, cigarette use, alcohol, exercise, blood sugar, blood pressure and cholesterol, authors found that (4):

Learning from prior pandemic outbreak, a 2009 study looking at weight and prognosis from H1N1 found that the correlation with o**sity disappeared after adjusting for early antiviral treatment. The authors cautioned that there may not be a true association between o**sity and poor prognosis for H1N1 as it could be confounded by timely access to antiviral treatment (5).

We could improve outcomes for people living in larger bodies if health care providers provide the same degree of care when diagnosing, testing and treating medical conditions, similarly to thin patients.

Weight stigma in healthcare is well documented. These quotes from patients illustrate the medical oppression faced by those living in larger bodies:

"Everytime I go to the doctor's office, I am told that weight is the problem and I need to lose weight. As if I didn't try. Every time I go on a diet, I lose weight and only to regain more later."

"My surgeon said that I should not have a kidney transplant unless I also agree to weight loss surgery.

"I cannot have the surgery for my hiatus hernia until I lose some weight."

Surgeons claim that outcomes are better when there is less adipose tissue present. Assuming weight loss of 20 to 50 lbs is feasible, patients are statistically more likely to end up heavier five years later (6). Dieting (ie. the pursuit of weight loss) is a precursor to further weight gain (6).

The more important question is: Are surgeons being trained to perform surgeries on larger bodies? If not, why is that so? Is it a lack of skills or lack of will? If bariatric surgeons can perform weight loss surgery (WLS) on patients with very high BMIs, surgeons from different fields should be trained to operate on bigger bodies.

We know that diet and exercise do not produce sustainable long-term weight loss, opening the door for reasons why WLS and medications should be more widely considered. Bariatric medicine argues that the side effects and long term implications from WLS outweighs the benefits. WLS is touted as a cure for diabetes.

However, a long term prospective study found that the remission rate of type 2 diabetes was 75%, 62% and 51% at 2, 6 and 12 years post surgery respectively (7). In other words, diabetes returned to almost half of those who underwent surgery 12 years later.

Another large prospective study found that suicide or self harm is 1.78 to 3.16 times higher in surgery patients compared to non-surgery groups. Those patients that died had similar or greater weight loss than those who did not. The risk remained even after controlling for pre-existing psychiatric conditions and various social economic factors. However, the authors concluded that:

"Despite our finding of an increased risk in suicide, we do not believe that our findings.....should discourage use of bariatric surgery, at least not from a survival perspective (8)".

If this same increased risk of suicide and self harm was found for any other type of surgery (but WLS), it would likely be deemed unacceptable by the medical community.

OC highlights that there can be psychological complications resulting from bariatric surgery and stated that clinicians should be aware of potential post-bariatric psychological issues that may arise, including among others, depression and suicide. This raises the issue as to whether patients are aware of these risks as well as they weigh the pros and cons of WLS.

In 1949, neurologist Antonio Egas Moniz was awarded the Nobel Prize for his work in lobotomy.

"The slow rise and rapid fall of the lobotomy can give us pause to wonder: In the future, what practice of today will be looked on with horror? (9)". Classifying o**sity as a disease and treating it with WLS, may in fact, lead us to look back in horror one day.

OC defines o**sity as a chronic, progressive and relapsing disease, characterized by abnormal and excess adiposity that impairs health and social well-being. However, diseases such as diabetes and hypertension are chronic and progressive diseases on their own. In other words, people tend to develop these diseases with age, regardless of weight.

Furthermore, even though the American Medical Association declared o**sity a disease, it did so against the advice of its own Public Health and Science Committee (10). For these reasons, I do not believe that o**sity should be viewed as a disease.

Let's not forget that some people are destined to be in larger bodies, especially Black and Indigenous bodies, simply because of genetic makeup (11). Consider the normal distribution bell curve, whereby some will be on extreme ends of the weight distribution. It is simply unethical to force these bodies to conform to what is deemed to be an acceptable body, a construct that is socially driven.

Rather than focusing on weight loss efforts, a more equitable way would be to address collective determinants of health. A myriad of factors influence the way people eat - poverty, access to a variety of produce, access to safe drinking water, working conditions and hours, access to childcare, social support, mental health struggles, and culture to name a few. If we allocate as much funding as we do to o**sity research and WLS to social justice efforts, the impact would be monumental.

Adopting a weight-inclusive approach rather than a weight-normative approach for facilitating health is more sustainable and equitable. There is evidence to show that we can improve health outcomes without making weight loss the main focus (6).

If Dietitians of Canada (DC) is committed to have diversity and inclusion shape the future of the association, DC would critically evaluate the current evidence that highlights the harm caused by weight-normative approaches (6).

O**sity is used throughout the article deliberately to recognize how hurtful and stigmatizing the term is to people living in larger bodies. Many grassroot organizations have spoken out against the labeling of o**sity as a disease.

The content of this letter represents the opinions of the author and those who signed it, not the organizations where they are employed.

Care2
UPDATED - Obesity is not a diease. Weight loss surgery is not the cure.
SHARETWEET