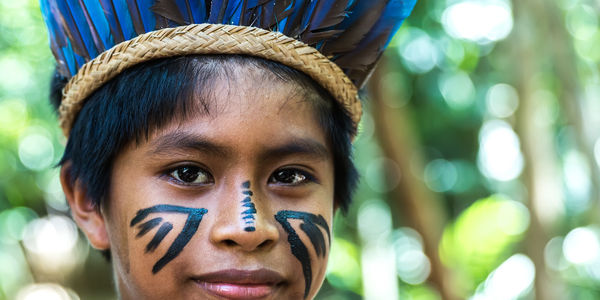 Coca Farmers Are Destroying This Pristine Forest and Endangering the Isolated Tribes That Live There.

There's an invasion taking place in the Peruvian Amazon that almost no one is talking about.
It is there, in some of the world's most secluded jungles, that farmers from nearby regions have decided to stake claim to pristine land, toppling mature jungle to clear cut large swaths of terrain for coca farms - the plant used to produce cocaine.

The region is home to several tribes that rely on the bounty of the forest to sustain them. They subsist on the fruits and vegetables they gather and the animals they hunt and fish. The newcomers pose a direct threat to their way of life and the future of some of the protected species that live there.

A report by Mongabay revealed that hundreds of acres of land have been cleared away along the Sepahua River. These parcels encroach into the buffer zone of the protected Alto Purús National Park and two reserves for isolated tribes. Yet, while the park is officially protected, Peruvian officials have seemingly turned their backs on the land and the people that live there. Investigators report that "the control post for Alto Purús National Park, intended to prevent illegal activities in the buffer zone," hasn't been staffed in years. Instead, the buildings and area around it have been taken over by the very farmers the control post should have kept out.

These farmers not only destroy the land but overfish and hunt, endangering animal populations and livelihoods. If they are not stopped, there are sure to be clashes between farmers and indigenous tribes. And if history tells us anything, confrontations between miners, farmers, and indigenous people only end one way - with the murder of native peoples.

It is the Peruvian government's duty to protect the park and the vulnerable populations that call it home. There is no other option. Please sign the petition and ask the Peruvian government to step in and stop the encroachment of coca farmers into the Alto Purús National Park.
Sign Petition
SHAREShare this petition with friends!TWEETEMAILEMBED
Sign Petition
See more petitions:
You have JavaScript disabled. Without it, our site might not function properly.

Care2
Coca Farmers Are Destroying This Pristine Forest and Endangering the Isolated Tribes That Live There.
SHARETWEET