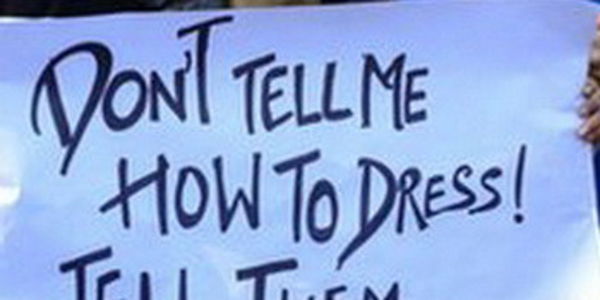 A letter to Government Officials in Cameroon

We believe that violence against women is INTOLERABLE. And yet a campaign to enforce an ambiguous law on decency has been launched, which has given rise to incessant complains of all types of violence on women carried out by officers enforcing the 'DRESS CODE' as per Section 263 of the Cameroon Penal Code.

The 'DRESS CODE' law which prohibits indecency is an ambiguous law that fails to define the problem it seeks to resolve and the enforcement mechanisms. We believe that all persons have the right to decide what to wear, and a right to exist without fear.

Girls and women are reportedly stripped off their clothes by enforcement officers. Others are incarcerated, beaten and humiliated. Dressing is a mode of expression and should not be restricted by the government.
Because of this law, and the recently launched campaign by the Minister of Women Empowerment, and Minister of Culture, girls in Cameroon are now susceptible to violence, degrading treatment, torture, rape and arbitrary punishment.
Women and girls are denied access into hospitals, schools, churches based on what their choice of dressing. It is being reported that Enforcement officers subject these women to humiliation and degradation by stripping them off their clothes, beating them up in public places and arbitrarily arresting them. This is totally UNACCEPTABLE
According to the Maputo Protocol: The Protocol to the African Charter on Human and Peoples' Rights on the Rights of Women in Africa (2) Every woman shall have the right to respect as a person and to the free development of her personality.
Cameroon's approach towards sexual harrasment, and gender violence has been to tell women how to dress, infringing on their freedom of expression. The government of Cameroon has blamed the victim instead of the agressor. This too, is absolutely unacceptable.
The ministry of Women Empowerment and the government as a whole, need to change their entire approach towards sexual harrassment, rape, and gender violence.
REPEAL THE 'DRESS CODE' Law Now and respect the Universal Declaration of Human Rights, Convention on the Elimination of all Forms of Discrimination against Women, African Charter on Human and People's Rights, The Maputo Protocol and The Cameroon Constitution Preamble
Sign Petition
SHAREShare this petition with friends!TWEETEMAILEMBED
Sign Petition
See more petitions:
You have JavaScript disabled. Without it, our site might not function properly.