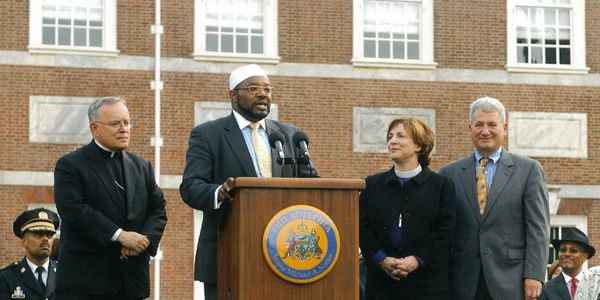 Since April 2, you might have noticed the offensive new ads running on SEPTA buses across Philadelphia, disparaging and denigrating our region's peaceful Muslim community.

Together, we can stand up to this bigotry and change the story.

These ads -- which are distorted, prejudicial, and inflame hatred -- are being run by a hate group from New Hampshire, and have been plastered in cities around the country. The courts ruled that SEPTA can’t stop the derogatory and hurtful messages, but that doesn’t mean the rest of us have to watch in silence. We can affirm the constitutional protection of free speech while still condemning irresponsible speech.

All voices are welcome. Please reject these divisive ads and sign this petition to stand with our Muslim brothers and sisters and say: These ads do not speak for me. I reject this hatred, I stand with you, and I value you for enriching our shared community.

As religious leaders, we condemn inflammatory messages that serve to divide, stigmatize, and incite prejudice. Working with the members of the diverse faith and ethnic communities within Philadelphia, our challenge and our hope is to strengthen the ties among all communities to improve the quality of life.

Sign today, and the Interfaith Center of Greater Philadelphia will deliver your signature to local Muslim leaders to show your solidarity and love!

Sign this petition to support the following interreligious statement issued by the Religious Leaders Council of Greater Philadelphia:

“In September, a New Hampshire-based group known as “The American Freedom Defense Initiative” (AFDI) sought to purchase advertising space on SEPTA as part of a campaign that AFDI has pursued in transit systems in several major cities across the country, including New York City, Washington, and San Francisco. SEPTA declined, due to the derogatory and hurtful nature of the messages. On March 11, 2015 the courts ruled that SEPTA must accept the ads. The ads began their four-week run on April 2nd and will appear on 84 SEPTA buses.

While we affirm the constitutional protection of free speech, that does not diminish our condemnation of irresponsible speech.  The language used in these proposed advertisements is distorted, prejudicial, and inflames hatred.

It was our hope as religious leaders that hate-filled messages would not be carried throughout the neighborhoods of Philadelphia on the sides of SEPTA buses, trolleys, and subways. We condemn inflammatory messages that serve to divide, stigmatize, and incite prejudice.  We will continue to reject attempts to stereotype any tradition or community.  Working as spiritual leaders and working with the members of the diverse faith and ethnic communities within Philadelphia, our challenge and our hope is to strengthen the ties among all communities to improve the quality of life.

The Religious Leaders Council calls on the greater Philadelphia community to join us in opposing intolerance and building trust and understanding.