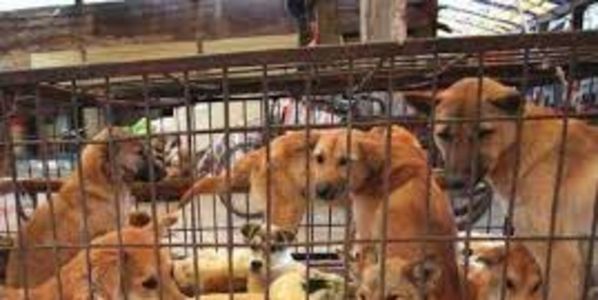 in which ever part of the World you are.

So let us say this laud and clear: Stop Killing Dogs for Annual Yulin Dog-Eating Festival!! Find another way to celebrate!!

to the Yulin Dog Festival, a yearly tradition in Yulin, Guangxi Zhuang autonomous region of China,

A Chinese dog awaits his turn at slaughter as part of the annual Yulin Dog Eating Festival,

an ancient tradition that celebrates the summer solstice.

The Guardian, a UK-based news source said in an article:

"Animal rights groups say 10,000 to 15,000 dogs are slaughtered during the festival each year,

and that many are electrocuted, burned and skinned alive. Pictures posted online show flayed dogs,

dogs hanging from meat hooks, and piles of dog corpses on the side of the road.

to treat maladies such as impotence and poor circulation."

In addition to protests against the tradition of eating an animal that is cherished, even in China,

as a family pet and companion, critics claim that the dogs are illegally obtained, usually stolen family pets

or picked up as strays. And, because these dogs are not raised in farms and are questionably sourced,

there are no quarantine systems in place to monitor the health of the animals, thereby raising additional concerns

of safety to Yulin residents that partake in the festival.

According to an open letter by the Hong Kong-based NGO Animals Asia, many of the dogs consumed during the festival are strays and abductees.

Some are transported to the city on filthy, overcrowded trucks, significantly increasing the risk

that they carry rabies and other contagious diseases.

In 2011, a similar festival in the Zhejiang province of China was cancelled

due to public outcry and a massive internet petition.

SO LET'S DO THAT ONCE AGAIN, LET US SIGN TO STOP THIS OUTRAGEOUS TRADITION!!

P.S. Since it was P.S.Gravemaker who raised our awareness about this celebration through his petition, we are adding a link to that petition:

And also, adding a link to the petition from a friend Patricia regarding the same subject:

We will hopefully stop this slaughter with our joint forces.