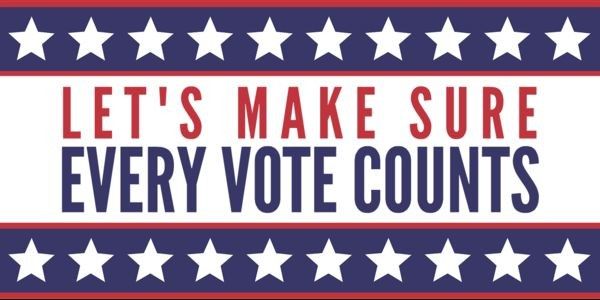 Election and Elections past; we have experienced out of control spending, voter fraud, ballot errors, ballot equipment errors with a blind trust system that offers no confirmation of receipt for the individual voter. We need an more fair and transparent voting system that not only repairs the present problems but returns the confidence of the system back to the people while empowering their voice and options.

We demand a repeal of the electoral college to allow the elections to be decided by majority vote through the instant runoff voting system. The instant runoff voting system allow each voter to choose multiple candidates, from his preferred candidate to his least preferred candidate. If the voters primary choice does not win the majority vote his/her vote will transfer to the voters second choice; and to the third; till a single candidate with the majority vote is determined. This will allow people to examine all of their options, increase their confidence to choose the best candidate instead of the better of two evils.

Gerrymandering must be prevented. Political parties have used redistricting to strengthen their parties at the voter's expense. We demand all redistricting be removed from political party influences. The districts should be drawn by third parties outside of the influences of the politicians. All information, results and reasoning's for redistricting must be made available for the public.

Our voting system, as it is, offers no confirmation for the voter to ensure their vote has been properly recorded. Each ballot will be assigned with the voters for mandatory Paper Ballot will be freely accessible to everyone online or a hard copy by request. The ballots will only have the users mandatory Paper Ballot for identification. This will allow the individual to check the accuracy of his ballot, make the election results fully transparent, and protect the voter's identification.

The out-of-control campaign spending must stop. SuperPACs and anonymous third party donations make up more than half of the overall campaign spending during elections. They can almost buy an election for the candidate they support, simply by spending the most money. All candidates from every party deserve an equal chance to persuade the voters. Stricter laws must be applied to stop outrageous SuperPAC and third party influences. All candidates must have an equal spending cap.

SuperPACs are not necessary to gather information and follow-ups on the candidates. This is the responsibility of the media. Candidates should work closer with independent and local media. Besides media coverage, the only political influences will come directly from the candidates themselves. All broadcast and mail influences regarding the election must only come from the candidates. Any third party or SuperPAC that violates these limitations will be prosecuted.

Candidates will no longer be allowed to accept donations. All moneys will come directly from the federal, state and local governments; within the limitations of their budgets. These moneys from the taxpayers will be evenly distributed among all candidates on the ballots to ensure an even playing field. All moneys spent by the candidates must be documented and release to public records. The citizens have every right to know exactly how these funds are being spent. Any unspent moneys will be returned back to the federal, state or local government that distributed the funds.

Limiting all candidates spending will help drive them to lead a more constructive campaign, instead of destructive campaign. They must work harder to convince voters for their support without any help or influence from anyone besides the taxpayers. They are elected by the tax payers and should remain indebted only to the tax payers. election and elections past; we have experienced out of control spending, voter fraud, ballot errors, ballot equipment errors with a blind trust system that offers no conformation of receipt for the individual voter. We need an more fair and transparent voting system that not only repairs the present problems but returns the confidence of the system back to the people while empowering their voice and options.

The United States of America has an election system that undermines equal representation, fosters and maintains an auctioneering environment, and puts the power of politics squarely and unequivocally in the hands of the wealthy and corrupt--at the expense of the vast majority of the electorate. We demand a constitutional convention and amendment to the constitution to halt this at breakneck speed: 1. We want publicly-funded, equal-time candidate presentations and debates.

2. We want privately-financed campaigns and campaign contributions banned. Wealth buying influence is not free-speech, it's corruption. That's common sense. If elections were publicly funded, they would be cheap, and no one could command more influence than another--except in reason, honor, and integrity--the way it should be.

2. We want privately-financed campaigns and campaign contributions banned. Wealth buying influence is not free-speech, it's corruption. That's common sense. If elections were publicly funded, they would be cheap, and no one could command more influence than another--except in reason, honor, and integrity--the way it should be.

vote for House and Senate candidates who are members of the Electoral Reform Coalition, or who are committed to reforming the electoral system to be more proportional, representative, democratic and fair.

The two-party winner-take-all electoral system is not a great idea, and everyone knows it. It's divisive, simplistic, corruptible and undemocratic.

Our winner-take-all electoral system allows only two parties. They become massive, corruptible, and broad in their rhetoric but minimal in their differences. Around the nation, most voters view their opposition party as tyrannical and evil, while their chosen party is simply "the lesser of two evils." They do not vote for a third party, even one closer to their political ideology, because it is viewed as a wasted vote. That is not democracy.

In only vote for Electoral Reform Coalition candidates who will make their first priority to advance democracy for all Americans through a more representative form of elections.

Change the two party system to Proportional Representation voting system. There politicians are elected in multi-member districts instead of single-member districts. The number of seats is proportional to the amount of its support among voters.

Proportional voting increases voter choice and allows more accurate representation of the political parties in legislature. The basic approach of proportional representation is simple: If you have a 10-member district and the Republicans win 50% of the vote, they receive five of the ten seats. If the Democrats win 30% of the vote, they get three seats; and if a third party gets 20% of the vote, they win two seats. PR voting systems provide more accurate representation of third parties. Only Way is to Abolish the Electoral College to do that is to Amend the constitution to abolish the Electoral College. Hold presidential elections based on PR vote. One person one vote to determine the one leader who is supposed to answer to all the people of the country. The Electoral College has outlasted its usefulness. It is part of the constitution, written when communication was by pony express. Voters currently living and voting in a "red" or "blue" state are disenfranchised, because their vote doesn't matter. Eliminating the electoral college means: no "swing" states getting all the attention and all the campaign stops and all the empty campaign promises. The electoral members are selected by the two main political parties, Republican and Democrat, disenfranchising all other voters, independent, Libertarian, And to other Political Parties. End it now. It's Time to Raise the BAR: :Ballot Access Reform: and Elevate Debates Real Democracy is for a Mandatory Paper Ballot and Add None of the Above to the Ballot too.

Protect the Vote, Save our Democracy

Right to Vote Amendment to The US Constitution

amending the US Constitution to state explicitly and unequivocally that every US citizen meeting age and residency requirements has an absolute right to vote expeditiously in federal, state, and local elections. Furthermore, imposition of any arbitrary, capricious or discriminatory law, eligibility criterion, or indirect barrier to the access of the voting franchise resulting from overt action by government or its elected or appointed officials, or by neglect on their part, or by interference of non-governmental citizens or entities, shall be regarded as a violation of this constitutional guarantee.

The right to vote is not explicitly stated in the U.S. Constitution. A handful of phrases in several amendments state a limited number of categories of barriers and discriminatory practices that are dis-allowed. A specific amendment is needed to simply, clearly and categorically state that all US citizens have the right to vote in federal, state, and local elections, for which they meet age and residence requirements, and that imposition of any arbitrary, capricious or discriminatory laws or eligibility criteria to the access of the voting franchise resulting from overt action by government or its elected or appointed officials, or by neglect on their part, or by interference of non-governmental citizens or entities, is a violation of the federal constitution. In the 21st Century Americans should also have explicit constitutional protection against inadequate poll access, waiting for hours in lines, shoddy voting devices, having their names arbitrarily removed from registration rolls, or being misled or intimidated by individuals or organizations working to influence election outcomes. An explicit declaration of each citizen's right to vote takes on new importance and urgency given the recent decision by the United States Supreme Court to review and reconsider continued enforcement of the Voter Rights Act of 1965, the hallmark civil rights achievement of the 20th century. It is clear that creative avenues of discrimination have continued to emerge in the absence of an overarching declaration of every citizen's right to vote and similarly overarching prohibition of any overt or indirect discriminatory practices.