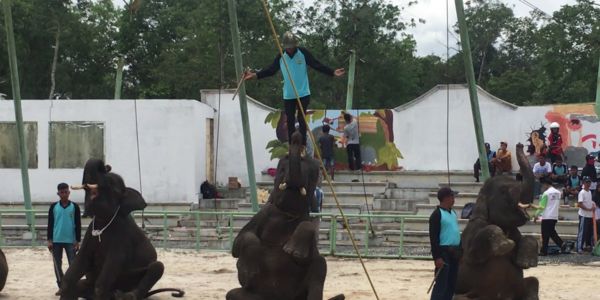 JUSTICE for Bita and Yani - STOP abuse and exploitation of elephants!

Under law No.479/Kpts-II/1998 decreed by the Indonesian Ministry of Forestry, zoo and conservation establishments must protect and deliver ethical treatment of the endangered Sumatran elephants. Despite this law, the endangered Sumatran elephants continue to be exploited all over Indonesia, forced to be ready for pictures, give rides and performances to entertain tourists.

For elephants to offer rides and perform, they are snatched from their mothers at a very young age and undergo a cruel spirit breaking process, where they are hobbled and tortured with sticks, hooks and ropes. When the training is done they are put into small crates for the rest of the day. This process is repeated daily until their spirit is broken and they submit.

Our team has witnessed the abuse of elephants, regardless of age. Young elephants were ridden by adult humans, ready with bull hooks in their hands and forced to perform. The torture, exploitation and abuse coupled with lack of best animal welfare practices have resulted in the deaths of several Sumatran elephants. The most publicized death is Yani the endangered Sumatran elephant from Bandung Zoo. She was denied medical attention and died in tears. As recent as September 2017, another endangered Sumatran elephant, 28 years old Bita from Bukittinggi Zoo died due to lack of specialist medical attention. She had sores on her left leg, most likely from being chained and had been sick for 3 months.

These acts of cruelty and abuse must stop!!

Please join us and demand that President Widodo, and the Ministry of Environment and Forestry Indonesia, to STOP ALL FORMS OF ABUSE AND EXPLOITATION TOWARDS THE ENDANGERED SUMATRAN ELEPHANTS!

Care2
JUSTICE for Bita and Yani - STOP abuse and exploitation of elephants!
SHARETWEET