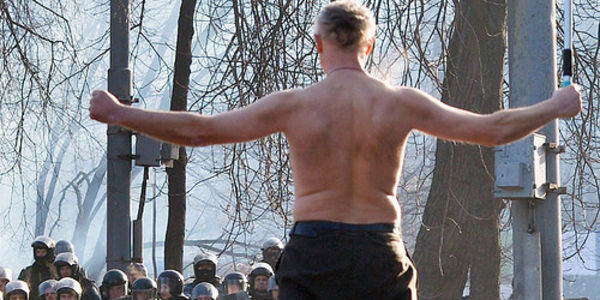 During recent murderous events in January and February, about a hundred people were killed and many still dying every day in hospitals. There is still no clear evidence of which exact military force did this but everything was done under control and order of the former President of Ukraine, Yanukovich, and the former Secretary of the Interior, Zakharchenko.

There is a plenty of evidence that people were deliberately killed by snipers. They did not have any weapons, and many did not have any protective ammunition. Snipers shot medical volunteers to death when they tried to help injured people. This is against ANY international laws and agreement!

In the name of the” Heaven’s Hundred / Force” (as we called those heroes that died those days) we ask to proceed with arrest and investigation towards the former President and the former Secretary of the Interior and others responsible as well in the Hague Tribunal, on the grounds that they have committed crimes against humanity and war crimes.

Among ” Heaven’s Hundred / Force” there were teachers, students, engineers, programmers, farmers, builders…… there were ordinary Ukrainians….fathers, sons, husbands, brothers, fiancées… but all of them were HEROES!!

Ukrainians are demanding the resignation of the government and of the President as well as the punishment of those in charge of “Berkut" special forces and others behind the abusive treatment of protesters.

There is plenty of evidence which shows that the human rights of those who protest against the government have been violated. Members of the “Berkut” special forces have tortured protestors, with several people dying.

This video shows members of the “Berkut” special forces mocking a protester who has been stripped naked except for his boots in -10 C degrees (14F) on the street. During World War II, the Nazis used to do the very same thing to Soviet soldiers.

In recent speeches made by the Prime Minister, the President and other government officials, they all pretend that that Ukraine is a democratic country. As the abusive and inhumane treatment of the protester in the video too clearly shows, this is not the case at all.

The torture the protester in the video endured is just one example of many, many cases in which Ukrainian citizens have been cruelly and violently treated by state forces. Please sign the petition to stand with the anti-government protesters and demand Ukraine restore human rights.
Sign Petition
SHAREShare this petition with friends!TWEETEMAILEMBED
Sign Petition
See more petitions:
You have JavaScript disabled. Without it, our site might not function properly.