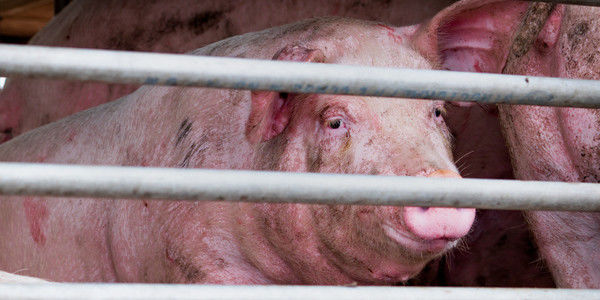 Most of us already know that factory farms where animals are locked up, squeezed dry, and butchered are places right out of horror movies, filled with all the filthy smells, mounds of underfoot feces, blood splatters, and screams that one might expect.

But the government of Wales is taking a new and novel approach to improving animal welfare for livestock: they're determined to bring transparency by requiring CCTV cameras in all Wesh slaughterhouses.

This is huge news and could go a long way towards reducing abuses. Now it's time for the rest of the UK to follow suit! Sign the petition to demand the British parliament pass a law mandating that all British slaughterhouses install CCTV to monitor the treatment of farmed animals.

Wales's approach is in direct contrast to much of the rest of the world, particularly the United States and Canada. In the U.S. and Canada, so-called "ag-gag" laws elevate corporate farmers above the suffering of animals, and even above the rights of whistleblowers. Agricultural gag laws do this by criminalizing acts that would reveal how horrendous conditions are inside factory farms. So if a former employee saw something horrendous and chose to film it to expose cruelty, that employee -- not the managers or corporate executives who ignore such behavior -- would now be a criminal.

CCTV, on the other hand, would blow the whole world of animal torture wide open, showing exactly what happens inside slaughtering facilities. This would force factory farmers to hold themselves to higher standards. Instead of benefiting from government-enforced secrecy, slaughterhouses would be committed to improving their operations in order to treat animals more humanely.

Luckily, Wales is now setting an example for the rest of the world, and especially for the rest of its neighbors within the United Kingdom. British officials have talked a big game in the past two years about improving animal rights within the nation, taking steps to recognize the sentience of animals and restrict the export of live animals overseas. Now they need to improve life for livestock in the UK by requiring CCTV in all slaughterhouses! Sign the petition if you agree!
Sign Petition
SHAREShare With FriendsTWEETEMAILEMBED
Sign Petition
See more petitions:
You have JavaScript disabled. Without it, our site might not function properly.