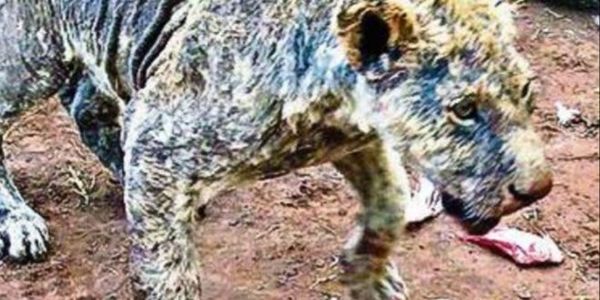 SOUTH AFRICA, PERMANENTLY REVOKE ALL PERMITS AND LICENCE TO MR STEINMAN AND THE PIENIKA LION FARM

Pictures showing the shocking state of lion cubs, infested with severe mange, too sick and malnourished to be able to stand on their own paws, went viral in April 2019, exposing the obscure face of the lion breeding industry in South Africa.

The animals of the PIENIKA FARM were discovered on the 11th of April, when the National Council of Societies for the Prevention of Cruelty to Animals (NSPCA) inspected their premises. 108 big cats including lions, leopards, tigers and caracals, were found in highly overcrowded enclosures, sick and neglected, with no water and shelter; the owner, Jan Steinman, is currently a Senior Member of the South African Predator Association (SAPA), a federation ironically founded, as their President Kirsten Nematandani stressed, "to ensure very high welfare standards" in this controversial industry. This means that Mr Steinman is a personality entitled to officially advise new SAPA members on how to operate in their businesses and within the SAPA Code of Conduct. The NSPCA discovered also that the farm had more lions than their permit allowed.

The NSPCA had also recently discovered that, out of the 260 lion breeding facilities to inspect, 88 were operating without a valid permit. Surprisingly,  all missing permits were immediately issued by the Government, in the face of a 2018 parliamentary resolution and recommendation to the Department of Environmental Affairs to "Initiate, as a matter of urgency, a legislative review of this industry, with a view of putting an end to this practice".

It is estimated that at least 8.000 big cats are bred in horrific conditions for pure commercial purposes in South Africa. The industry, developed only in the last decade or so, does not have any eco-conservation, traditional, educational or social value. Sadly, it is not regulated by any specific national legislation in terms of welfare or whatsoever. Cats are bred and grown out of sight and far from any control, for the financial gain of a few farmers. Predators are shot in confined hunts, with no chance to escape or are slaughtered purely for their bones, in unspecified and unregulated lion slaughterhouses. Since they are merely considered as "sacks" for their own skeletons, the basic physical needs and the elementary welfare of these unfortunate animals can be ignored throughout their entire lives and can be considered as a waste of time and money by their breeders. Their bones are what counts and these are highly priced in the trade of lion body parts to Asia.

It is sickening that the South African Government, with the CITES (Convention of International Trade in Endangered Species - which releases, with few question asked, all import/export permits for the trading in wildlife) and the SAPA, are together complicit in this whole-scale lion killing, in this revolting and globally condemned industry, which is opposed nationally and internationally by citizens and authorities. Even the biggest hunting and trophy hunting confraternities and organizations, including the Safari Club International (SCI) don't want to be associated with this practice.

The basic 'Five Freedoms', a principle elaborated back in 1967 to essentially regulate animal farming in the UK and thereafter adopted worldwide as a primary guideline for the protection of every farm animal's welfare, has in fact been readjusted by the SAPA for their "High Standard" Code of Conduct.

With the addition of the simple word "undue" the whole meaning of these basic principles changes. In the document, you read:

For proper welfare within the lion industry the following must be ensured:

This wording seems to purposely leave room for unlimited abuse.

Going back to the Pienika Farm, you would think that this distinct facility will now be closed. You would hope that those cubs and abused animals found in appalling conditions will now all be confiscated, removed from their abusers and taken to safety; that the licence of this specific facility will be revoked and the business shut down and Mr Steinman expelled by the SAPA.

Quite the contrary: at the Pienika Farm, only 2 of the 27 sick cubs and of the 108 animals were rescued and are now in the care of a VET. A third cub was straight away put down for his conditions. The other sick and neglected cats remained and are still at this facility!

Steinman has been charged with animal cruelty by the NSPCA and the SAPA has announced that will take a "disciplinary action" but the truth is that this Senior Member will probably only be fined and allowed to carry on as before. The permit to accommodate the extra number of cats will most probably be issued by the Government and so, the "can will be kicked forward!"

WE DEMAND THAT THE GOVERNEMENT OF SOUTH AFRICA URGENTLY STARTS A TRANSPARENT PROCESS FOR THE PHASING OUT OF THIS SHAMEFUL, IMMORAL, ABHORRENT BUSINESS.

WE DEMAND THAT THE AUTHORITIES PERMANENTLY REVOKE ALL PERMITS AND LICENCES ISSUED TO MR STEINMAN AND THE PIENIKA FARM.

The animals kept at this facility must, as a matter of urgency, be confiscated and assisted with respect and humanely. Their health conditions addressed, treated where possible; adult females should be sterilized and animals should be, possibly relocated to safe venues.