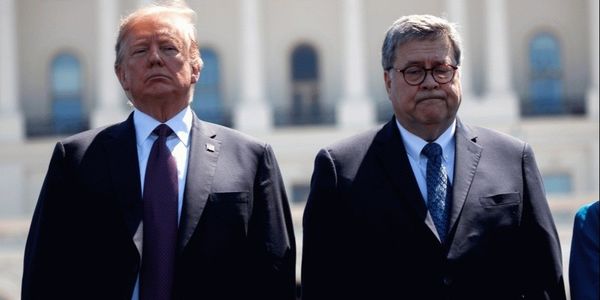 Just two months after taking office, Attorney General William Barr made clear that he would be neglecting his obligation to defend the constitution as America's top lawyer in favor of serving as Donald Trump's chief accomplice. That's when he presented a cherry-picked bastardization of the Mueller Report as a "total and complete exoneration" of Trump even though it said, the exact opposite.

It was the most egregious abuse by an AG in US history at the time, but Barr was just getting started.

Soon after, Barr dropped charges against Trump's crony and original National Security Advisor Michael Flynn, despite the fact that Flynn had already admitted his guilt, and overruled prosecutors in an unprecedented ploy to let Trump bagman Roger Stone off for seven felony convictions with a slap on the wrist.

Most recently, in a stunning move, Barr announced the resignation of U.S. Attorney Geoffrey Berman, the prosecutor who has been investigating the crimes of Trump's and his cronies — even though Berman had not resigned. It took another day for Barr to force Berman out, but the motive for the underhanded ploy could not have been clearer — to obstruct investigations into the president and those who do his bidding.

Barr is repeatedly abdicating his responsibilities in bad faith to help Trump get away with crimes. The attorney general is our lawyer as American citizens, not the president's fixer, and it's time to put a stop  to this abuse.