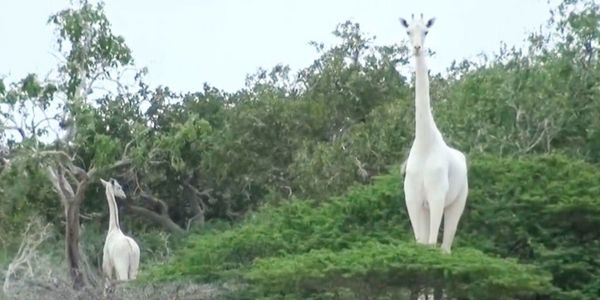 Kenya’s Only White Female Giraffe and Her Baby Were Slaughtered!

The scientific and conservation community is mourning a family of rare white giraffes in Kenya after two of its herd - a mother and her calf - were found dead and decomposing in a conservancy in northern Kenya. Officials announced that the deaths were at the hands of poachers, whose murderous act slashed the Kenyan population of this extremely rare giraffe to just one - a bull whose entire family was taken from him.

Sign to demand the Kenyan authorities find and prosecute these poachers!

The mother giraffe and her calf were first spotted in 2017, creating a global conversation with their unique appearance. The worldwide population of giraffes has been in jeopardy for decades. The reticulated giraffe, the species you most likely picture when thinking of the iconic creatures, has suffered a population decline of almost 50% in that time. The white giraffes seemed to facilitate a much-needed dialogue about conservation, not just for these rarest of animals but all of their giraffe relatives.

In 2019, another white calf was born, bringing the total population to a fragile three. Now that two are dead, found wasted away to almost skeletons, conservationists fear losses on multiple levels. The living, thriving white giraffes had created a vital boom in the Kenyan tourist industry. Beyond that, they represented a considerable investment in genetic research and conservation, which is now lost forever.

Conservation in Kenya has struggled a great deal. Elephant and rhino populations are especially susceptible to poaching for their horns, but giraffe heads, meat, and other products sell for a hefty sum - not just in Africa, but around the world. Amidst Kenyan efforts to improve, these killings come as a massive blow. The government and authorities must take strong measures to find, arrest, and punish the poachers responsible or it could mean a renewed confidence from poachers and a sharp increase in wildlife killings.

Please, sign the petition today to call for the swift arrest and prosecution of the poachers responsible for the deaths of this mother and her calf!
Sign Petition
SHAREShare this petition with friends!TWEETEMAILEMBED
Sign Petition
See more petitions:
You have JavaScript disabled. Without it, our site might not function properly.

Care2
Kenya’s Only White Female Giraffe and Her Baby Were Slaughtered!
SHARETWEET