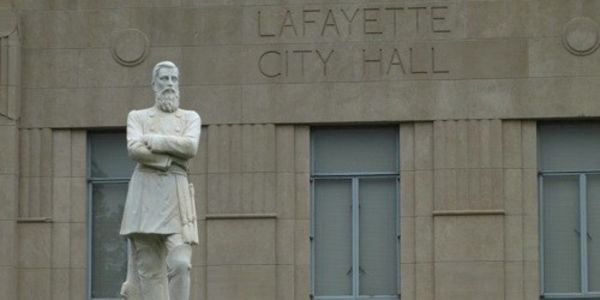 Take Down the General Mouton Statue

During the Reconstruction Era, The United Daughters of the Confederacy erected the General Alfred Mouton statue in the heart of Downtown Lafayette. The goal of the UDC was to rewrite history in order to portray the Confederacy's role in the war as being noble or heroic, in turn reaffirming their belief in white supremacy. Knowing the importance of black culture and its influence in Lafayette, we now recognize that this statue no longer represents this community.

You can read more about the history and message of this statue here: https://whyalfred.webs.com/

Below are some statements from people in our community regarding this statue:

-“The statue of Alfred Mouton WILL come down. Maybe not today. Maybe not tomorrow. But one day, it will. The world IS changing. Everyday, you’re seeing more and more symbols of the old south come down; by one way or another. Some go down peacefully and with dignity; to be placed in museums or dedication areas for the civil. Some, as you can see in the current news cycle, are torn down and desecrated by angry members of their community who are fed up with symbols they feel don’t represent who they want to be going forward. To anyone that has the power to move the statue, take this OPPORTUNITY. If you really respect the statue, or Mouton himself, move it while you still have some say so in it. Because we can only control what we do today. My generation MIGHT let the statue stand, but the world has changed; and I don’t know if the generation after me will tolerate confederate symbols going down with dignity." -Cory Stewart

-“The General Mouton Statue that stands high and proud in Downtown Lafayette is an ever-present reminder of historical ignorance and military romanticism. In South Louisiana it is not simple enough to identify a "heavy-handed" vigilante and slave-owning Confederate general in order to remove a monument from the public eye. We must go further and assess the effects of the monument and its contribution to the watering down of history. Alfred Mouton was a West Point graduate, a Confederate general, and the son of Louisiana Governor Alexandre Mouton. Here is where some of the older generation might like to stop listening, but this is exactly what we mean when we say ‘watering down of history’.

Mouton’s accolades are mirrored by the legacy his family has left. He and his brother alone owned more than 250 slaves at a time on hundreds of acres of private ‘family’ land which was to be sold to create the city of Lafayette (mostly Downtown Lafayette and surrounding-Freetown, for instance). Now we are left with confusion as to how the amassed wealth of the ‘white’ Mouton family has not acknowledged nor been transferred to the ‘black’ Moutons. Of course they are family. We all are. How could we continue to support privatization of land, which oppresses some and supports others, often at a great imbalance? We work hard and live here on city property just the same, just like the hundreds of people who worked the land before us, on land that was owned by a powerful, rich white man and his family. The statue standing supports that this land was FAIRLY his, when in fact, no fairness occurred throughout these wealth transactions.

Monuments are supposed to be a pillar of strength and harmony for a community. The General Mouton statue is simply not an example of where we, the current residents of Acadiana, would like to seek our strength.”


Our belief is not that the statue should be destroyed or damaged, but rather that it should be relocated to the cemetery where Mouton is buried, to the Alexandre Mouton house museum, or to some place where it can be historically contextualized as a monument to Jim Crow era terrorism and repression.